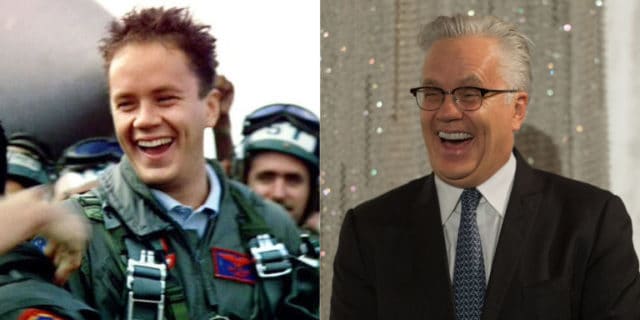 Tim Robbins is one of those guys that can get lost in the shuffle when you’re talking about a film and don’t seem to recall that he was there. A lot of this would have to do with the fact that he doesn’t play a big part, or the film just wasn’t that great. In the latter case you might want to actually forget that he was in the film to start with. But when he’s on and his part is good enough to warrant remembering him you’ll know about it.

He’s a great actor, but sometimes he’s had a role in films that just wasn’t worth remembering.

Case in point. This film wasn’t worth the memory since the CGI effects were kind of like what you’d imagine a child would think up when trying to decide how to defeat an evil villain from the comics. Add onto that the fact that Hal Jordan is played by the same wisecracking actor that would eventually go on to play Deadpool and you get a film in which Robbins could have been left out completely and it wouldn’t have made a difference.

4. Austin Powers: The Spy Who Shagged Me

As the president he’s kind of a wuss in this film, but he’s also overshadowed by Mike Meyers, who was the main character that kind of just drowned out everyone in the film. Even those that were supposed to be more high profile, like Heather Graham, kind of faded into the background. It might be that Meyers eccentricities were hard to deal with or that he just stole the show, but Robbins never had a chance here.

Of all the movies you might have forgotten that he was in this should be one of those that you’re thankful for. A lot of people still swear by Howard the Duck but others are kind of glad he was gone for so long. As you might have seen in an MCU post-credit ending it looks like he might come back eventually, but we can always hope for the best and assume that Robbins’ involvement in this film will not be remembered.

While it’s not for sure why you would ever forget him in this movie it could be that you just forgot the movie altogether. That’s kind of sad really since the film was one of the better baseball flicks ever made. Of course he was still pretty young and his acting might have come of as a little wanting for experience. But it was still a good movie.

Considering how tall Robbins is you would almost think that he wouldn’t make it in a cockpit. It might be a little too cramped is the feeling but really it was another film in which he just kind of got pushed aside by the stars that really made the movie what it was. He was there, that’s something that film buffs would be able to tell you, but that’s about it.

Some of the best movies he’s been in you wouldn’t ever forget.