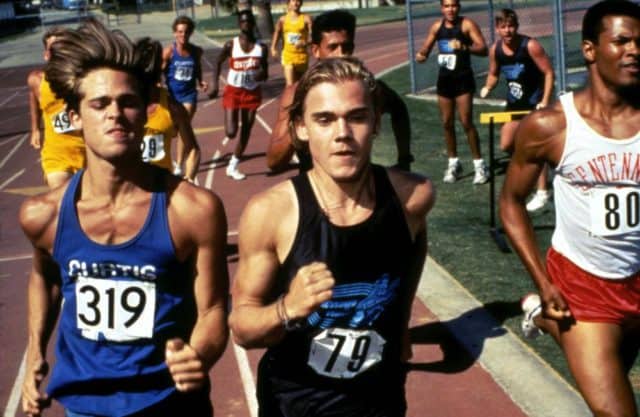 You might think you know every role that an icon like Brad Pitt has ever played, but chances are there are at least a few roles you don’t know about. If you have heard of the clips to come then congratulations you must be a true movie buff. If not don’t worry about it, because every megastar had to get their start somewhere doing some film that won’t ever be remembered by the coming generations. At least thanks to DVD and On Demand and several other movie services we can recall these older films and see the truth.

Here are a few roles by Brad Pitt you might not know about.

The premise is pretty simple. A new kid moves into the school, starts obsessing on Pitt’s girlfriend, and eventually he gets rubbed the wrong way. People start dying, Pitt and his girlfriend get attacked, and things just tend to escalate. One thing is obvious, the creepy janitor is a factor within the film no matter how long he lasts. How does that always seem to happen?

4. Joe Maloney – Across the Tracks

It’s not easy competing with family sometimes, and it’s truly frustrating when a family member is just as talented if not more so but doesn’t have the drive to compete. Ricky Shroeder actually stars in this along with Brad Pitt and it might just be one of his final roles before he started doing minor TV appearances here and there.

J.D. is that slick-talking huckster that you don’t ever want to trust or turn your back on. Unfortunately Thelma and Louise decided to be trusting of the wrong person. Give them both this much credit though, they took to heart the manner in which J.D. told Thelma to rob a bank and it worked. He was good for something, just not a whole lot.

Now wouldn’t this be a conflicting relationship. You work in a cartoon world, you have a cartoon girlfriend that’s a knockout, but thanks to the rules of Cool World you can’t have any intimate physical contact, you know what I’m talking about, or the whole world might turn topsy-turvy. That seems like a whole lot of pent up somethin-somethin that would be hard not to release after a while.

Sometimes revenge is all that matters. It’s the beacon in the night, the dish that many can’t wait to taste, and the burning need that drives the most well laid plans. No child deserves the punishment that the young boys in this film were subjected to, and it seems almost right that Michael spent his entire life seeking out ways to ruin the men that damaged him and his friends. He devoted every last waking hour of his existence to bringing them down in one way or another, and his friends simply couldn’t wait to get the ball rolling. How many ADA’s do you know of that would purposely take a case to lose? At least he had one good reason to do so.

See? Brad Pitt has done a lot more than you realized.