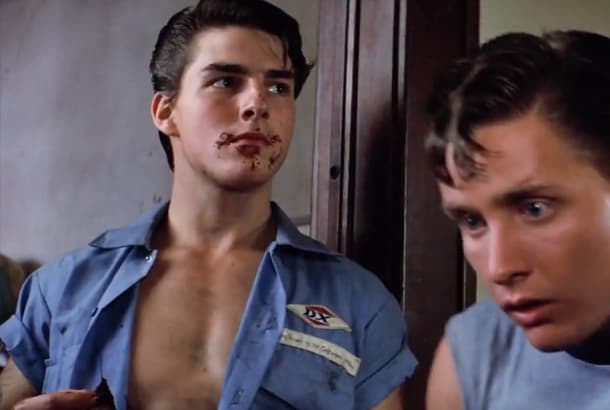 Tom Cruise is a guy that’s already written his legend and is just looking to cash it in. He’s done nearly everything he can in film and is still reaching for the top. He’s definitely stalled a couple of times but look at it this way, he’s never fully quit. You can like him or hate him and it makes no never mind. He’s going to come back and keep doing what he wants to do because he believes in it and he believes in himself. On film he’s the guy you don’t often want to bet against because chances are good that he’s going to find a way back and make you regret ever doubting him. A lot of his characters are cocky, arrogant, and even a bit annoying at times. But he makes it look good while he’s doing it.

Hard to believe that anyone would forget a single one of his performances, but here are some that people seemed to have overlooked.

He’s more of a secondary character in this one but he’s still arrogant and brash. Keep in mind he’s still fairly young just like the rest of them and comes by the attitude honestly. But Steve is the kind of guy you tell to be quiet over and over and he just keeps talking. He’s kept in check mostly by the others but the fact that he doesn’t often shut up is reminiscent of many an iconic loudmouth in film history.Â  Also, if you haven’t seen The Outsiders, you are truly missing out.

Never, ever, EVER give Tom Cruise a gun when he plays an unstable character. Out of all them he was down for the cause the most obviously since he went out in a hail of gunfire. He wasn’t about to surrender no matter how bad it got, and started popping off rounds just as there seemed to be a peaceful resolution in sight. Some people simply should not go into the military, or even military school for that matter.

3. The Color of Money

The old dogs don’t always give out every last trick of the trade. Even if they tutor and teach the younger generation a lot of them will hold something in reserve. Did Newman use Cruise? Yes. Did he teach him what he knew to get ahead? Yes. Was Cruise really as ready as he thought he was? Yes, it would appear so. He learned the art of the hustle and despite Newman’s experience and skill, he still has a few things to learn.

This movie is actually based on a true story in which Barry Seal was tapped by the CIA to start working the Medellin drug cartel. After running so much product and doing enough jobs it was inevitable that everything would begin to fall apart. This was a big issue when the Iran-Contra scandal came along during the Reagan administration.

1. All The Right Moves

A small-town boy wants to make it big and go to college, but doesn’t quite know how to get there. Fighting with his coach, arguing with his girlfriend, and displaying an all around bad attitude doesn’t help. But when he finally confronts his coach they hash it out and eventually he finds a way to get what he wants.

Really, who could forget Tom Cruise in any of these roles?