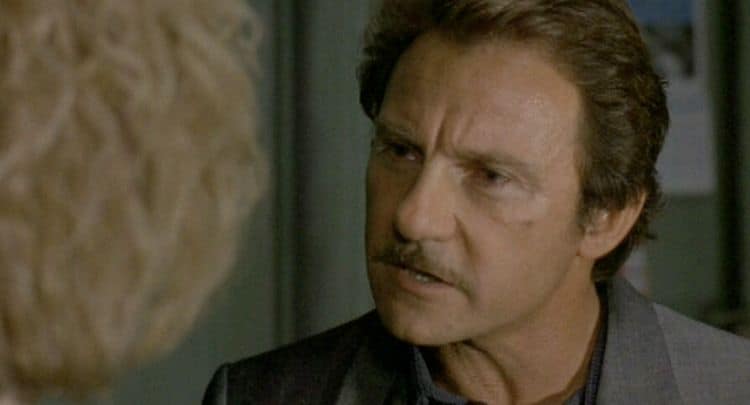 There are some actors that it might appear impossible to forget in any movie, but as I’ve said before if there are other big-name actors in the movie and the actor in question isn’t a big part of the main part of the movie, then it’s entirely possible. Harvey Keitel is one of many that can be absolutely forceful and take over in a movie and he can also be the guy laying back and waiting for his part to be important enough to really turn on the talent. Forgetting him at all is kind of difficult, but forgetting that he was in certain movies can happen since he’s played supporting and bit roles along with everyone else. But there are some movies that went in such awkward directions or had him playing such a muted role that it’s hard to remember that he was there in the first place, but memory comes back quickly once a person is reminded. The movies in which he really takes charge make it impossible to forget that he’s there, but those that allow others to take over make it a little easier to remember.

With that said, here are a few movies that you might have forgotten Harvey Keitel was in.

Back in the 80s, Molly Ringwald and even Robert Downey Jr. were still big enough stars that they were able to take over a movie in a big way and dominate a lot of the screen time. Plus, this movie had so many other supporting characters in it from Danny Aiello to Bob Gunton that it was kind of hard to keep track of anyone other than the two leads that really made the movie what it was. It’s easy enough to remember Keitel’s part in this movie after being reminded, but up until then one might think of Ringwald or RDJ first since the whole story was basically about them getting together

This is one of those movies that Harvey was a part of but in which he was kind of a muted presence for a lot of the movie and therefore didn’t really take over anything. Between Edward Norton, Ralph Fiennes, and Anthony Hopkins it was a little tough to really focus on anyone else considering that the three men were essentially making the story what it was and this excluded most of the other actors unless they were directly involved in some way. But upon being reminded that he was in this movie it’s easy to hear his voice again as one remembers that he was Norton’s go-to guy when he needed something.

He had a very small role in this movie so that could be why a lot of people might forget that this ever happened, since while he’s been in a movie with Robert De Niro before, more than once actually, the two big stars in this movie were De Niro and Ben Stiller. Keitel played a contractor that was less than impressed by De Niro’s character and was taking his time in getting Stiller’s home done and completed so that he could move in with his family. But it’s funny to remember the scene in which the two were squabbling since it ended with De Niro being buried under a pile of sand due to a mistake.

Anyone that tries to focus on Nicolas cage is bound to forget that there are other people in the movie unless they’re working right next to him since Cage tends to be kind of distracting thanks to his acting style. Still, remembering that Keitel was an FBI agent that was tasked with bringing back the Declaration of Independence and sending someone to prison for the theft. The fact that he was a Freemason as well could have been why he didn’t arrest Cage’s character, as it would have made a lot of sense to write it in this way, but one would have to ask the writers if that’s how things shook out.

1. From Dusk till Dawn

One might think that it would be impossible to forget Harvey in a movie like this, but it’s happened in the past, and a lot of it has to do with George Clooney, who took over this movie in such a big way that it was easy to forget who else was in it every now and then. The role of Jacob was an important one since, as campy as it was, he managed to turn a lot of mundane items into weapons that could be used against vampires, and in a very big way made it possible for at least two of the original group to survive. But he does have a couple of great scenes in the movie that are hard to forget.

Harvey’s a tough guy to forget anyway, but it happens.