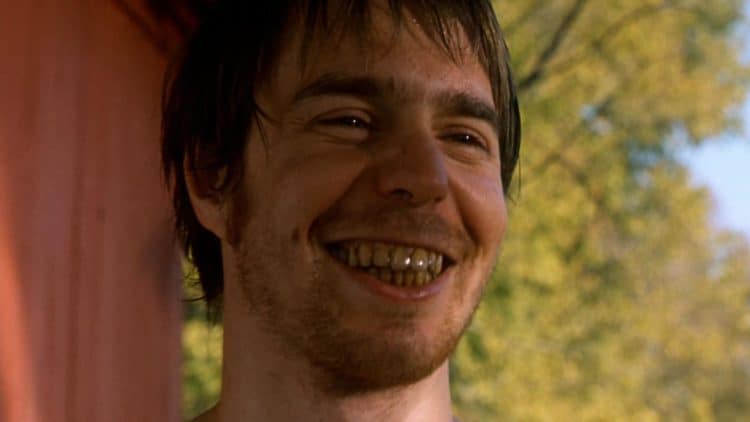 Sam Rockwell is either an actor that people know really well or don’t really know at all. He’s the kind of guy that can play one of the nicest people in any movie he shows up in, or he can be the biggest scuzz you’ve ever seen, and everything in-between. He can also be entirely forgettable while he’s doing it or hide in plain sight since the guy can take on a lot of different roles that people might not fully recognize him in. There are plenty of movies that would be easy to remember him in since he takes on the lead or one of the most prominent roles, but trying to pick him out in some movies or remember him is somehow difficult for a number of reasons. One is that he’s acted alongside some of the most famous names in the business on the way to becoming one of the most famous individuals around, and another could be due to the fact that he’s actually a very believable tagalong that is there for a specific reason but at the same time feels like he’s the fifth wheel and somehow doesn’t take up enough space to be counted. There’s no doubt of his skill and talent since the guy can do whatever is needed of him, but there are those times when it’s actually pretty difficult to remember if he’s been in a movie or not.

Here are a few movies you might have forgotten Sam Rockwell was in.

The role he had in this movie is kind of one of those that a person can say ‘oh yeah, he was there’ since he’s not the biggest deal in the movie given that Tommy Lee Davidson and Halle Berry were the big deals of the movie and everyone else, even Samuel L. Jackson, were simply there to do their part. The movie might be one that a lot of people don’t remember since it was either so long ago or didn’t really turn a lot of heads given that it’s another movie based in an office setting about someone that’s wheeling and dealing trying to get what they want while trying to hook another person up with what they want.

How anyone could forget him in this movie is difficult to imagine since he played one of the vilest human beings ever by taking on the role of William Wharton, a violent criminal who, the audience later finds out, committed the crimes that had so much to do with this movie. Wharton is by far one of the most worthless human beings ever seen in a movie since he’s the type to worm his way into a person’s confidence and then do whatever he wants if he sees something that he’s interested in. The crimes that this character committed in this movie were absolutely horrible and it’s not with any sadness that Wharton ends being shot to death at one point.

People might actually be going ‘nuh-uh’ to this one since they don’t remember him at all in this movie. Well, keep in mind that Sam was still pretty young in this movie and he likely hadn’t made himself known nearly as much. But was one of the muggers that assaulted April O’Neal and he was shown later on talking to Casey Jones about the Shredder’s army being a ‘family’. Obviously, Casey didn’t really buy that, and it was seen that the gang broke up not too long after. But a person might have to watch the clips that were mentioned a couple of times to realize who the punk kid is in these scenes.

It might be that people just didn’t know about this movie but the fact is that it’s one of the more touching and amusing movies that Sam has been in. With Maya Rudolph and Steve Carell, this movie is definitely worth watching since it’s a story about a young man named Duncan who’s seeking somewhere he can feel comfortable since he can’t feel this way around his mother’s boyfriend. When he meets up with Owen, played by Rockwell, the eccentric manager of a local waterpark, he starts opening up in ways he didn’t expect and finds that there is something in life that he can finally enjoy.

One of the great things about Sam is that he can play the villain or he can be a heroic but very sarcastic figure as this appears to be one of his default settings. In this movie he wasn’t entirely believable as someone that was anything but bad simply because there appeared to be something about him that wasn’t right. But when he did turn out to be working with the bad guys it was still a nice twist.

He’s easy to misplace but hard to forget entirely.