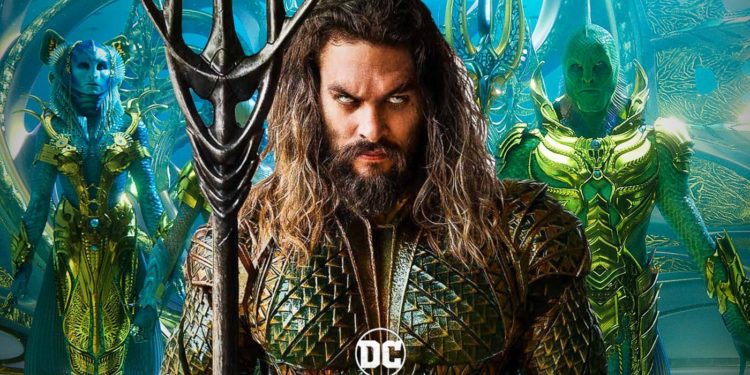 There’s been talk of Aquaman 2 and as you can imagine there have been several predictions that have already taken flight across the internet. While not all of them are bound to come true, it’s still interesting to see what people have to offer when thinking up what might happen in the sequel to the underwater adventure. It does feel as though a few things were left unsaid and undone in the last movie, but for the most part, it was an entertaining action movie that starred one of the biggest names of the era, Jason Momoa. While there have been plenty of articles calling out the controversy of keeping Amber Heard around when fans have actually petitioned to get her booted off the set, it’s not likely at this time that any such thing is going to happen since she’s already been seen getting ready for filming. But in terms of the movie it’s fair to say that a lot of people are going to feel one way about it or another when taking a variety of factors into account, Heard’s divorce from Johnny Depp is just one of them since the wish that she be booted results from the loss of a couple of roles for Depp, who was dropped due to the controversy that the divorce trial caused. But getting past that, let’s just say that any and all predictions about Aquaman 2 are people thinking out loud, and if they come true then so be it. If they don’t, then oh well.

Here are a few off-the-cuff predictions about Aquaman we’re willing to make.

5. Atlantis will either be seen as a threat or a curiosity to humans.

It sounds kind of ridiculous after what was witnessed in the last movie, but there are likely to be a few doubters when it comes to Atlantis and its existence in the DC universe since otherwise, it feels as though humans might actually feel threatened by another nation that is technologically-superior and definitely ready to breach the surface and make war. In all fairness, it’s hard to say that this is a surprise considering how land-dwellers tend to treat the waters they live around. It was actually mildly amusing to see how much trash had been dumped back on the world’s beaches in the first movie, especially since it was a bit of commentary on the real-life practices of human beings.

4. Mera will continue to express frustration with Arthur.

These two appear way too opposite to ever really be on the same page that often, and while it would appear that the actors get along just fine, kind of, when the cameras are off, it’s very likely that Mera will want Arthur to keep stepping up to his responsibilities. If Arthur means to be a part of the Justice League though and side with the surface dwellers it’s likely that this will become a point of contention between the two of them. Also, the character that Momoa has helped to create doesn’t feel as though he wants to be burdened with leadership and isn’t the type to be content to rule over a large group of people, much less multiple kingdoms.

There was too much put into this character to just get rid of him after the first major fight. The fact that he fell into the sea is a good reason to figure that someone came along, picked him up, and for one reason or another nursed him back to health. Whether or not he would go right back after Arthur or bide his time is hard to say, but if he does show up in the second movie it does feel as though he would see the wisdom in teaming up with someone, or he could possibly find even more powerful artifacts that might give him a greater edge against Arthur in a rematch. But he can’t possibly be gone that easily.

2. Orm will either disappear entirely or find an ally to strike back with.

Orm doesn’t come off as the type that would be satisfied with this kind of loss and it’s likely that he could be back eventually, and that he would find an ally. Perhaps he and Black Manta will find a way to get back at the guy that defeated them both and do so in a manner that might give them a certain measure of personal justice. But how they’ll go about it, if such a thing happens, is kind of hard to say since really, Orm isn’t that great of a tactician as the movie has shown.

This kind of goes back to the fourth point where Mera will probably continue to grill him about his responsibilities. Arthur feels more like a person that’s bound to do good things when he can and will help those in need, but he doesn’t strike me as a person that wants to be tied down in such a manner. One might wonder if he could find a way to rule and still be as free as possible, but it’s bound to be a point of frustration.

Some of these predictions might be realized, but it’s fair to say that if DC is looking to keep this character popular they might want to read the comics and take notes.