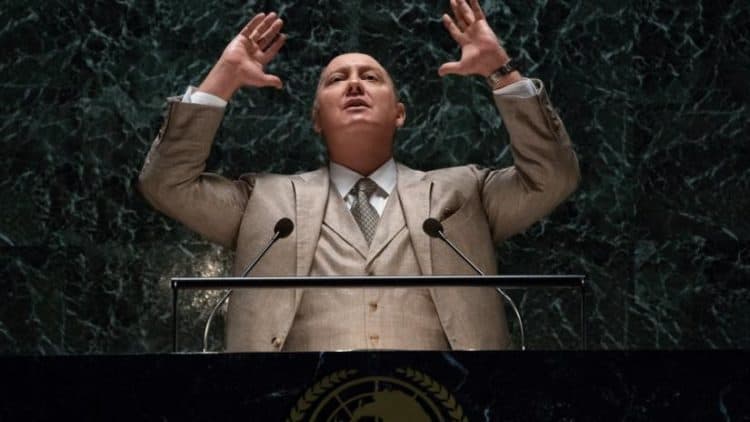 The Blacklist has been one of those shows that, so far, has kept people guessing more often than not and has returned James Spader to prominence in a big way. It’s not exactly the cut and dried show that you might expect as it does leave a lot more questions on the table than answers. At this point there’s an entire list of questions that some people feel will never get a full answer since the show has been ducking and dodging away from them for so long that it’s difficult to think that they might actually bite the bullet and really dig into a definitive answer. Fans are still hopeful however since obviously they want a resolution of some sort and are willing to keep watching to see if it will happen, or if they’ll be left at the precipice wondering just what really happened and why. Somehow one can assume that some of the questions might be answered, but people still won’t be happy.

Here are five questions from the show that might never get answered.

5. What is Red injecting himself with?

According to Brit Lawrence of CinemaBlend it’s all too obvious that Red is sick and is only getting worse as time goes on, but it’d be nice to know just what’s happening and what the guy is injecting himself with that allows him to keep going. The kind of cure or treatment than keep him on his feet as his illness worsens has to be something that you might think is almost like a miracle drug that acts like temporary cure that can keep the illness at bay for so long before he needs it again. But if he’s really that sick one would think that he might need even greater measures or he might simply keel over at some point.

4. Are Liz’s memories being manipulated?

Given what’s already been discovered about this show and what’s going on behind the backs of just about everyone and even being done to the heads of those that are firmly in the main part of the story it would seem likely. In other words yes, it does seem as though Liz’s memories are being manipulated in a big way and whether she’s aware of it or not or is completely oblivious is up to the viewer to decide. But when you think something in this show it ends up being flipped on its ear quite often, and thinking that Liz is unaffected or in some way immune went out with the first season.

Natalie Abrams of Entertainment Weekly backs up the idea that Red isn’t really who he says he is by going through each season and making solid points that have been right in front of us the whole time. When someone tells you that all criminals are liars, and that he is in fact a criminal, it could be a serious mind screw or it could be that person telling you to wise up since honestly Red has been as truthful as he’s been false. It’s hard to reason through his many riddles and half-buried truths and lies, but one thing has been made pretty clear to those that have been paying attention, he’s not the real Red that everyone has thought.

2. What is the Townsend Directive?

A great deal of this show has to do with the back-alley and shadowy dealings that go on beneath the notice of the people that should know what’s going on, but the Townsend Directive is at this point thought by some to allude to a coup d’etate that might be set into motion eventually. If that’s the case then things could get very serious indeed on the show, but as we already can guess this is something that Red might be able to foresee and even manipulate to his needs just as he’s done with so much else at this point. One thing about Red is that he knows things that many people should never know, and he also knows how to use them.

This character has raised more question than answers even after Bret Cullen was seen to step on screen and give the individual a face. But it would appear that in season 7 things are going to be straightened out as the stranger should be coming back with more answers. Of course the kind of answers that people might be looking for could be hidden behind more questions so it’s safer to think that you don’t know as much as you think you do and that any and all theories are bound to be debunked or verified in ways that you didn’t expect given that this is the simple and very obvious nature of the show.

Seriously, if you’ve been watching since season 1 then you know that things are almost never what they seem.