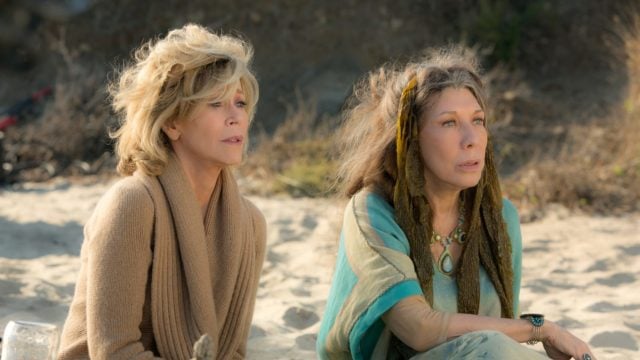 Grace and Frankie is a show that men should be watching and there’s a bunch of reasons why, but below are just a few that I’ve compile that you may or may not agree with. It’s a matter of subjectivity when coming up with reasons on why to watch any show, but this one is kind of interesting. Grace and Frankie are two older woman whose husbands have finally come out and expressed their love for each other. This of course leads to a lot of pain that is caused by this revelation, not only to Grace and Frankie, but to their adult children as well. The strange thing is that if the roles were reversed and Grace and Frankie were to be the ones that expressed their love for each other I get the feeling that the men feeling betrayed would be something that many people would feel was selfish and quite destructive to the overall process of acceptance. But since it’s the men hooking up it seems okay for the women to feel betrayed.

5. There’s no villain with the main four characters.

This would help immensely if you go into the show realizing that there are no bad guys here. It’s a messed up situation to be certain but there is nothing malicious about it, the men didn’t just run away with each other and leave their wives, to whom they’ve been married for decades. Instead the pain and agonizing sense of betrayal comes from realizing that they’ve been sneaking around together for roughly half of their marriages.

4. It handles homosexuality with a pleasing and comical manner.

Normally you would hear of someone having a severe issue with a show like this and how it handles homosexuality, and there might even be those that do have an issue. But really and truly the show has portrayed the matter in a very relaxed way that doesn’t dive headfirst into stereotypes and won’t devolve into something extremely vulgar. That at least is something worth mentioning.

3. It reminds you that in life, there are really no rules.

To be honest there are and there aren’t. Society has rules, life does not. Life goes where it wants and does as it pleases. Society tends to inflict rules upon those that try to live as best they can and pushes and pushes until people begin to question the rules. Those that follow those rules are often the ones that can’t understand what life is all about when the rules avail them nothing but a lot of undue stress and hurt.

Fonda and Tomlin are comedy gold together and are both classic actresses that know exactly how to play to their roles and play off of their costars. Watching them work is insanely pleasing and reminds you that it doesn’t matter how old they are or how little they still act at times, they’ve still got what it takes.

Grace can’t stand Frankie initially, while Frankie tends to like Grace just like she likes anybody else. They’re the free spirit and the tightly buttoned-down former businesswoman that needs everything to make sense. They’re perfect together.

If you haven’t watched it yet I would recommend doing so guys.