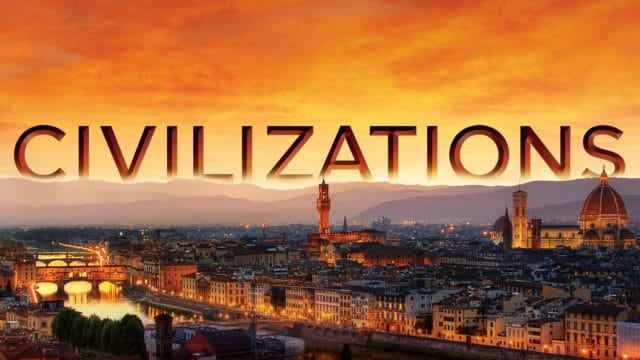 Civilizations premieres Tuesday, April 17, 2018, and it promises to intrigue, to inspire, and to introduce viewers to some of the most amazing works of art mankind has created throughout time. The nine-part PBS series surveys the role of human creativity in developing global cultures. Narrated by Live Schreiber, the series reveals the essence of creative power as it is manifested in things of beauty and ingenuity. The series is a must-watch, and available on PBS channels on Tuesday evenings or via streaming.

Civilizations was inspired by Kenneth Clark’s 1969 series on Western art. The landmark 1969 Civilisation brought great works of art to viewers in a series of thirteen episodes. The series combined highlights of art and architecture of the Western world with philosophy, and used an outline beginning with the Dark Ages and continuing through modern times. Presented and produced by the BBC, the art history documentary reached more viewers than had ever watched an art series before. It was focused on European male artists, writers, and composers.

The new series expands upon the model initiated by Kenneth Clark, but reaches out around the globe, telling the story of art across the world’s continents. Because it explores the human experience of creation without geographical boundaries, viewers will see incredible treasures while visiting the world’s greatest cultural sites. The series travels across time, beginning with the earliest moments of human history and continuing to the present.

Must Watch Reason One

Nine episodes illuminating the creative curiosity and imagination of mankind:

The series encounters the artwork of humankind from a global perspective. In the past, art history was often presented in a culture-centric way. This new documentary seeks to incorporate great artistic masterworks from cultures around the world, including religious, philosophical, and humanistic ideals which inspired them. Also explored are cultural interfaces which keep viewers aware that humans are connected across the globe-often in unexpected ways.

Three presenters, David Olusoga, Mary Beard, and Simon Schama, offer their updated looks at artwork from around the world. Though many critics consider Kenneth Clark’s original series Civilisation to be superior, other critics note that it has been 50 years since Clark took on this topic. Much has transpired in the world since then, and the three skilled historians bring new viewpoints within the context of an awareness that humans do not live in isolation.

Viewers can see landmarks of human creativity, and some of the greatest human achievements. The series travels to six continents and films the wonders of humanity which exist within 31 countries. It is a feast for the eyes and richly satisfies the wanderlust of world travelers.

The dazzling artworks serve as guideposts for exploring a myriad of human interactions. Over three years of filming, and all the behind the scenes work which accompanied the process, series creators attempted to fill the human need to explore creativity; focusing on the greatest art the world has. Each encounter sought to question what gives humans identity and humanity. These all have great power to bring change to lives and civilization for the better. The opportunity to consider the profound is the heart of the series and this may be the most compelling reason of all.