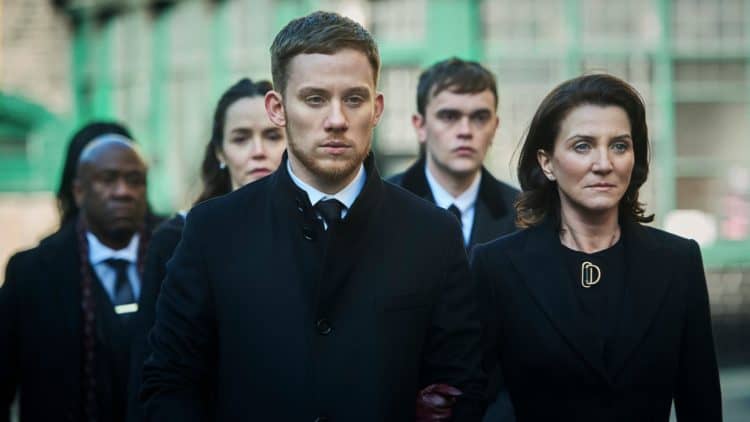 If a person tries very hard they can come up with a number of reasons why they should watch one show over another, even if those reasons happen to sound kind of silly at times. But the reasons for watching Gangs of London is pretty simple, it just looks like something worth watching. It might not be everyone’s cup of tea to be certain, but just watching the trailer makes it apparent that there’s much more to this show than might be derived from the title, since anything with ‘gang’ in it might be a turn-off for some people that don’t care the type of content the show is bound to bring. But the story, however violent and bloody it might get, is still one that deserves a discerning look since it speaks of a great deal of work to bring something entertaining and uniquely crafted to the audience in a way that has been seen a few times before but is usually enticing no matter how it’s delivered. If nothing else, the show looks like something that would be worth watching simply because it’s another exciting program that aims at keeping people on their toes with plot twists and a storyline that’s fairly simple but still has many moving parts.

Here are a few reasons why you might consider watching Gangs of London.

When one gang is being focused upon it’s enough to think that they’re going to have opposition from many different sources. But with international gangs taking the stage it feels as though things will be spiraling out of control rather quickly since with international attention comes international problems that could become a huge issue. One might want to point out that it’s not the first time we’ve seen gangs cross borders in this manner, but it’s still something that stands out as a very poignant reminder that gangs don’t always look at borders as impediments, but as opportunities to expand.

4. It helps fill the void left by The Sopranos.

Granted, The Sopranos ended back in 2007 and there have been several movies and shows since then that have dipped firmly into the genre, but this feels more like something that could be a true successor to such a show and could easily dive into the murky water of the gang world that many people enjoy watching. Whether it will be allowed to go that far or not is hard to say, but as of right now it does feel like a show that might have that kind of potential. It might take a bit more rounding out and some clever writing to keep things going, but otherwise, this show could possibly find itself moving in a very positive direction.

There are definitely elements there that help the show liken itself to the famed mafia movies but in a very modern way. When comparing anything to The Godfather though it’s largely peripheral since attempting to copy such a masterful movie would be a horrendous mistake on the part of any director or writer. The adherence to familiar elements and parts of the overall story is seen to be effective, but otherwise, the show is a tale that stands on its own and could possibly take off in a very big way. Any real similarity to the classic movie is coincidental it would appear, but it is fun to think that it shares something with Coppola’s creation.

2. It has a very interesting cast.

There aren’t a bunch of unknowns on the cast since everyone that’s been pulled in for the show has found success elsewhere, meaning that it’s being granted a skilled and experienced bunch that knows how to work as part of an ensemble cast and are fully capable when it comes to pulling their own weight. For a show such as this, it’s quite important for the cast to have some type of chemistry in order to make everything work the way it should. In this manner, the story is allowed to gain the focus it needs while the cast does what they do best in order to keep the audience entertained.

1. The story starts off with a killer opening.

Realizing that you’re watching the scene open from the point of view of someone that’s about to meet a very grisly end is kind of interesting. But learning that the same someone is about to be lit on fire before the rope connecting them to the building they’re dangling from is aflame as well is even more eye-opening. A beginning such as this makes it apparent that things have already been happening and that one is walking into the middle of something that’s going to require a bit of an explanation, and that the audience is already being forced to play catch-up.