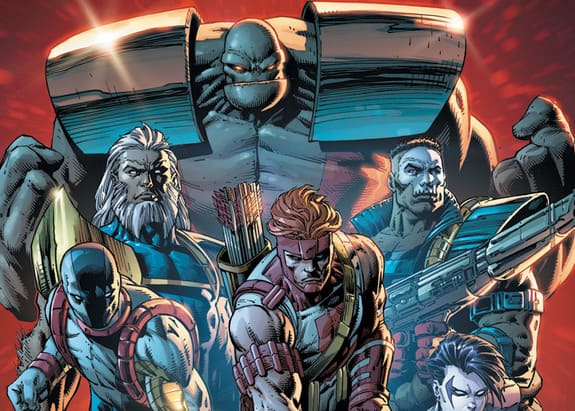 Marvel and DC have made some popular and successful movies with their characters. They both managed to build a universe based on their comic worlds, because heroes like Superman and Spider-Man are legendary. The world of comics has made other heroes like Batman and Iron Man well-known superheroes, but there are other heroes who pale in comparison to their popularity. This is probably because these superheroes don’t belong to Marvel or DC and the fact Â that they aren’t too super. Some of these heroes have had their own movies, such as Hellboy, Spawn, Judge Dredd, and The Teenage Mutant Ninja Turtles. These characters may not belong to Marvel or DC, but they made a name for themselves even before they had their own movies. Other heroes like them may not need movies, but it will boost their popularity.

Movies have a tendency to do wonders for comic book characters, so why not give them to the lesser-known ones? Here are five superheroes outside of Marvel and DC that need their own movies. That’s right, no Hellboy or Spawn. They’ll get their sequels hopefully soon.

The first superhero to kick off this list is like Iron Man mixed with The Punisher. He’s also one of Valiant Comics’ coolest characters, considering that he’s an ancient warrior wearing alien armor. Seriously, that’s just so awesome, it’s hard to believe no one has tried to make a movie about this guy yet. His real name is Aric of Dacia, a Visigoth prince and a rebel fighting against the Roman Empire. While fighting the Romans, he and his people are abducted by a hostile alien race called The Vine. Aric eventually led a revolt against his alien captors and stole a powerful relic called Shanhara, or the X-O Manowar armor. Although he managed to free himself, his compatriots were killed, and when he escaped back to Earth, he realized he was in a different century.

This is the kind of unique hero who would be extremely fun to watch on the big-screen. He’s a killer of aliens, an ancient warrior from 5th century Europe, and he just looks cool. His movie would be like Wonder Woman but with a guy learning to adapt to the 21st century. He’s a fish out of water that would be fun to see become a shark.

The success of Wonder Woman and Captain Marvel proved that female-led superhero movies are worth the watch. The female hero from Image Comics known as Witchblade would serve for a great movie star. This isn’t just because she has the appearance of a super hot cosplayer/model, but because of her background. She’s an NYPD homicide detective named Sara Pezzini who discovered a supernatural gauntlet. After she put it on, it granted her magical powers for the purpose of fighting evil. She’s a legit hero who fights crime and looks super hot when she’s doing it. Sure, seeing her in her costume on the big-screen would be awesome, but she is just a cool character that is too hard to pass up for a movie.

Here’s another hero from Image Comics, except this guy is very similar to Batman. Like Batman, he didn’t kill criminals, but he did step his crimefighting methods up a tad. When he defeated criminals, he broke their spines and left them to the police. Not a killer, but twice as brutal as Batman was. A movie with this antihero would be dark, but we would get to see his armor. Its got a familiar look to it, looking like a mixture of Wolverine and Iron Man, but it gets the job done. Compared to the other heroes on this list, his movie would be the most brutal, but that would mean justice for him. If it has to be rated R, then please go for it, because this is one antihero that shouldn’t be kept on a leash.

This hero is a green version of Hellboy. He’s a muscular reptile-looking tough guy with a fin on his head and a human’s personality. When he’s first introduced, the whole amnesia thing is a part of his debut, but it works in his favor. Although he looks like an alien, he decides to become a cop and join the Chicago Police Department. As a cop, he was pretty effective, contending with the super freaks that terrorized Chicago. One of his coolest images in comics is when he’s wearing a tank top and sunglasses with his gun in his hand and a badge attached to his belt. He’s just the kind of hero we’d like to break out a couple of six packs with and talk about his day on the job. Again, pretty similar to Hellboy.

This hero once had his own animated series, but now is time to give him his own live-action movie. Forget the CGI and just take the time to use the practical make-up. As for which actor should play him, it just needs to be someone who is tall and very buff. The first person who comes to mind is Dwayne Johnson, but he’s already in like three movies a year. Whoever is casted to play Dragon should just remember that he is a fun character.

Now I’m aware that this is a team and not just one hero, but these guys best function as a team. It includes a cast of colorful characters, including Shaft, Badrock, Vogue, Cougar, Die Hard, and a few others. They don’t require a series of solo movies to set them up, but they do need a fun vibe. If this movie gets made, it should just focus on not setting up a bigger universe and keep it all on the team. The heroes are all diverse in appearance and powers, but they bring people in all the time. Members like Shaft and Bedrock should be the Captain America and The Hulk of the team that need to be included. The list of heroes for this team is actually pretty long, but all would be cool to see on the big-screen.

You don’t have to be a Marvel or DC hero in order to get your own movie. Characters like Hellboy have proved that, but it’s unfortunate that we don’t get enough movies for those kind of superheroes. Let’s hope that Hollywood is taking some notes.