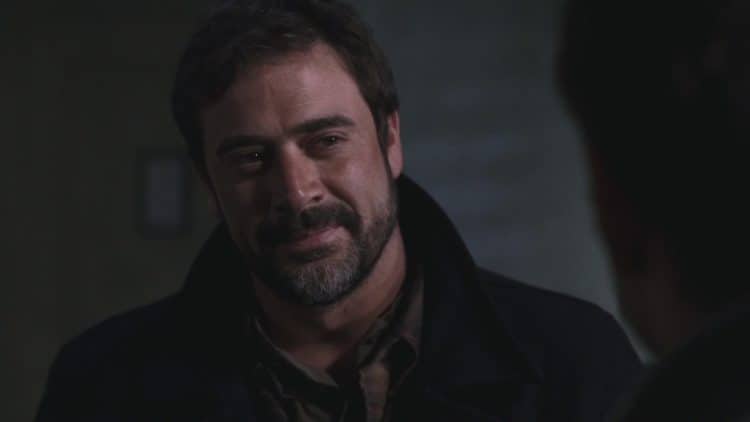 When it comes to spinoffs, they can be a serious miss, but some shows are so good they make room for some great derivative shows. Supernatural definitely qualifies in the second category. The only problem with a Supernatural spinoff is choosing who we most want to see more of. Naturally, everyone has their favorites, but we had a tough time picking out who’d make the best spinoff.Â  Here are five characters that would fit the bill.

From his crummy childhood to his time as a soldier in Vietnam John has a lot of stories to tell. As a character, we loved him in spite of his personal failings as a father, and we think his tortured tale of love and loss (in more than one way) would make for some compelling watching. His formative experiences make a great prequel saga, but we’d also like to see a parallel storyline about what he was doing at the time Sam and Dean were hunting. Also, Jeffrey Dean Morgan is a fabulous actor in general, and it’s hard to argue with anything that would bring more of him to the screen.

When contemplating spinoffs, there has to be at least one proposal about how the other half lives. Ruby is a fan favorite, and her complicated love relationship with Sam wasn’t the only thing that gave her fantastic depth and intriguing quirks like her dark sense of humor. We want to explore the witch-origin story more deeply. Her losses and her original era make for a unique perspective. However, it’s her time in the modern era that we wonder about. The parallel story of Ruby’s life outside her Winchester interactions is a source of endless speculation. Surely the demon didn’t sit around in hotel rooms waiting to see if Sam would come to drink her blood all the time. Demon life wasn’t something Supernatural really explored much. They tended to come in, cause trouble and get killed, but when you’re centuries old, there’s got to be more to it.

Full Disclosure, we love Felicia Day (the actress who played Charlie). With Alt-Charlie returned to earth, we know she’s got to have some serious backstory to tell. With the introduction of the Dark Charlie- Good Charlie dichotomy earlier in the series, we have to speculate about a possible second Charlie waiting in the wings as the other half of Alt-Charlie. We need to know if this Charlie has that “spark,” the original had that made her impossible for the Leviathans to copy. It’s convoluted, but simple stories aren’t much fun, and we’re pretty sure there aren’t any in the Supernatural universe. Additionally, we wouldn’t mind seeing a story with a lesbian hunter as the lead, after all being gay isn’t news, and it’s certainly past time to re-normalize it.

While Death wasn’t a single individual in Supernatural, we still find the character and idea fascinating. We’d love to see a series about this universe’s various Deaths because we don’t quite think Billie was the first. Perhaps the memories of the old Death take a few decades to kick in. Something vaguely inspired by Piers Anthony’s Incarnations of Immortality books would be amazing. As the oldest and strongest of the horsemen of the Apocalypse, we want to know more about how the new Death got chosen. Does the old Death push them down the road, or do they have a say at all? We’d like to see more about the creepy Reapers as well. They were one of the most genuinely scary aspects of the series, and any show based around Death would necessarily have more Reapers in it. Supernatural was all about the war between heaven and hell, but Death and the Reapers were the opposite of that war in many ways, they existed outside of the need to concern themselves with good or evil.

We know they’re technically two people, but the mother-daughter combo appeals to us. It’s good to see empowered women on TV, and the hard whiskey drinking Roadhouse owner Ellen is undoubtedly that. Though she wants to protect her daughter from hunting on her own, and everything else. She also seems to know that it can’t happen even as she fights so hard to force the issue. We were sad when she died, and we want her back. Surely, there’s room for another resurrection in Supernatural, but there’s another way to make this spinoff work. We know a prequel is always one way to go, and it can be wildly successful while adding a ton of great backstory to the universe, but we have something else in mind.

We’d like to see an Apocalypse world spinoff featuring these two powerful women fighting together. The Apocalypse world was probably the best alternate world of all the various places the Winchesters ever explored. The mythos just felt more complete, and it held us in a way other worlds couldn’t quite manage. We love the mother-daughter team up and even though Ellen was more researcher than fighter the end of the world will change a person. Her research would have gotten set back more than a little when the EMP went off over North America. We think these ladies would be swilling whiskey and dodging between the warring factions working on their own agenda at the end of the world, and they’d certainly have to set aside any differences. Ellen couldn’t avoid letting Jo fight.

Bonus– We’d love to see a blast from the past spinoff about Samuel Colt. Unfortunately, this idea isn’t as original as we thought. Someone already came up with the idea and beat us to the punch.

Since the moment they announced that Supernatural was ending the fans have been in a frenzy. It’s no surprise given that a whole generation grew up watching this show. Though no formal plans for any spinoffs have been announced, we’re still holding out hope that this isn’t the last we’ll see of Supernatural. Jensen Ackles has made allusions to a possible show set in the Supernatural universe, but they haven’t worked out in the past, and we’re afraid to get our hearts broken again. Binge watching this epic series may have to tide us over if the producers can’t manage to break out of the unfortunate trend of failed spinoffs.