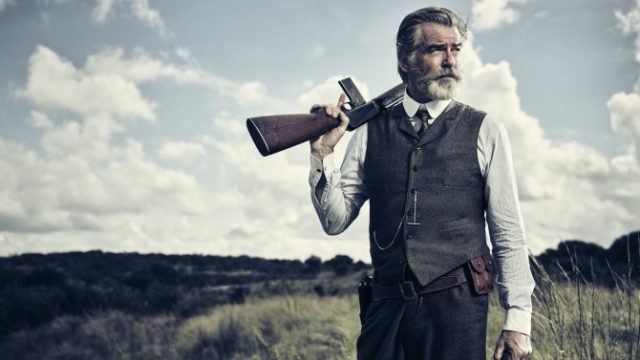 The Son is a western drama based on the 2013 novel of the same name. So far, its ten-episode first season is being shown on AMC, but it is interesting to note that a second season has been approved. In brief, the TV show focuses on Eli McCullough and his family, who are living in the state of Texas at a turbulent time in history even as the United States is on its steady rise to the status of superpower.

Here are five things that you may or may not have known about The Son:

The last time that Pierce Brosnan appeared on the TV screen was on Remington Steele, which was broadcast from 1982 to 1987. In other words, this is his first appearance on the TV screen in 30 years, which makes it a rather remarkable occasion to say the least. Interestingly, Brosnan had to hire a voice coach in order to get his Texan accent right, though he was able to leave in some of his native Irish accent because his character is of Irish descent.

Set During a Troubled But Little-Known Period

Between 1900 and 1910, more than 187,000 acres of land were transferred from the ownership of Texas-Mexicans to Anglo settlers, who began expanding into the land along the Rio Grande with the extension of the railroad system. The process was brutal, combining raising taxes that made it impossible for Texas-Mexicans to retain possession of their land with court challenges that forced them to sell their land to pay for their legal fees and in some cases, the blatant eviction of the previous occupants through violent means.

Combined with a recent conclusion of the Mexican Revolution, this process spurred a series of raids by both Texas-Mexicans and Mexicans, which were intended by some of the participants as an attempt at secession. This resulted in massive reprisals, which ended up not just killing thousands of Texas-Mexicans but also caused more to flee the violence of the borderlands.

The Horse Had a Critical Role In Comanche Culture

The Comanche are believed to have emerged from the Shoshone after acquiring horses from the Pueblo Indians after the Pueblo Revolt, which saw most of the native population rising up against the Spanish colonialists. This made it much easier for the new horse riders to find the best hunting grounds, thus ensuring a population boom as well as the cementing of their steeds in their emergent culture. Some scholars suspect that the Comanche might have been the first Plains natives to incorporate the horse into their culture to such an extent, meaning that they might have had a critical role in spreading the domesticated animal to the rest of the Southern Plains.

Native Americans did indeed kidnap and adopt people from their enemies, with a particular focus on children, teenagers, and women so as to minimize their deaths during conflict. In some cases, this was a ritualized event intended to prevent inbreeding, whereas in other cases, this was a much more traumatic occurrence that could involve a great deal of violence. Unfortunately, this practice resulted in a huge culture clash with European settlers, with the natives being horrified at the killing of children, teenagers, and women and the settlers being horrified at the idea of Europeans being kidnapped and adopted by the natives.

As strange as it sounds, the Americas don’t seem to have developed infectious diseases as dangerous to humans as their counterparts in Africa, Asia, and Europe. This is believed to have been because the Native Americans had a paucity of domesticable animals, meaning that there were fewer opportunities for the pathogens lurking in them to make the leap to humans. As a result, when settlers brought their infectious diseases with them to the Americas, the result was often apocalyptic for the natives because it was as though they were being struck by all of the epidemics that had devastated Africa, Asia, and Europe for millennia all at once with no chance to recover between them.