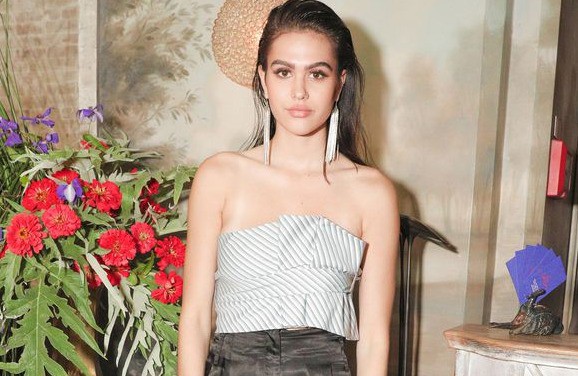 She’s being dubbed as the next Gigi Hadid, but make no mistake. This starlet is rising and shining on her own, and as Lisa Rinna’s and Harry Hamlin’s daughter, we really can’t expect anything less. Amelia Gray Hamlin has been in the news lately for her bold move of revealing to the public something very deep and personal to her. The teen has recently recovered from her battles with anorexia, and she has come out with the struggles that she’s gone through in the last couple of years. Many have applauded her for her move, and she may be as wise as we think she is. Amelia is certainly one to look out for, and her are a few things you should know about her.

It may seem like Amelia’s been in the spotlight for a while now, but she’s actually just starting to come out on her own. Amelia’s modeling is fairly new. She signed with IMG just June of last year as a 16-year-old model. Amelia claims that she’s found a new respect for models after realizing how much hard work it really takes to be successful in the business.

Amelia happens to love astronomy like her dad, whose father happened to have been an aeronautical engineer. She had dreams of becoming an astronaut before realizing that modeling was more her calling. In fact, her favorite wardrobe piece is her alpha NASA bomber jacket. Amelia is a self-proclaimed science geek, and we think that it’s the most adorable thing ever.

Besides modeling and astronomy, Amelia has another passion: sports. If she’s not doing her job or perusing the planetarium, you can probably find Amelia swinging rackets in a tennis field. She absolutely loves tennis. Aside from that, Amelia also had some training in boxing. It certainly doesn’t hurt her career that she’s very much into sports. She shouldn’t have any difficulty keeping her figure fit and sporty. At least if she ever decides to stop modeling, she has other options ahead of her.

As a result of her anorexia, Amelia developed other health complications. She was diagnosed with Hashimoto’s disease not too long ago. Hashimoto’s is an autoimmune disorder that attacks the thyroid glands. It’s been a real challenge for Amelia to keep up with her disorder and her modeling career, but she claims that being open about it has helped her cope. The support and love she gets from her fans have helped her through.

Amelia also happens to be an actress, and besides her parents’ reality TV show, she’s appeared in another show as well. This show, Rachel and the Treeschoolers, is actually a nod to just how much of a science nerd she actually is. Treeschoolers is a TV series that teaches children how to explore the world around them using science and music. Amelia’s role might not be that big in the series; she plays a treehouse friend. But that’s surely enough for a side gig.