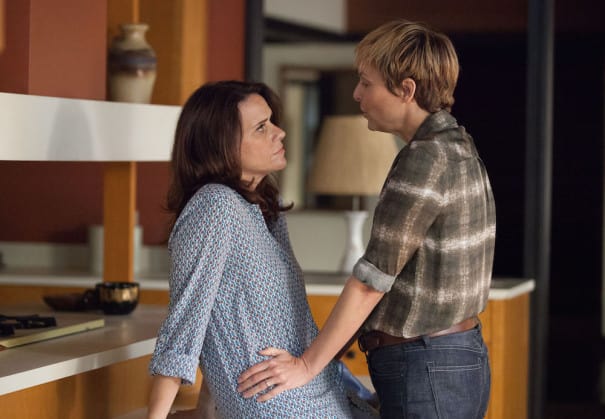 The new television series Transparent is rapidly becoming one of TV fans critical obsessions. One of the shows rising stars is finding ways to keep herself grounded after the emergence of her new level of fame. While Amy Landecker may seem like a new arrival to the Hollywood, she is not a new actor. She has spent the vast majority of her acting career acting in obscurity, but not anymore. She first arrived in Hollywood to pursue new opportunities in the realm of acting, and five years after some short-lived successes, and some struggles to find her footing, her experience paid off when she landed her role and the new whirlwind series, Transparent.

One of the focuses of Landecker is not to allow her newfound fame change her into some type of diva, so she works very hard and remaining grounded while dealing with all of this new attention. Here are five things that you didn’t know about Amy Landecker.

1. She is Actually a Veteran Actress

While some actors and actresses find their niche as feature stars, others find themselves paid well, but working in relative obscurity when compared to their Hollywood counterparts. This was the case for Amy Landecker who worked primarily as a stage actress and a voiceover artist. While she has been content with living and working in obscurity, she is prepared to embrace and manage her newfound fame associated with the television series, Transparent.

2. She Moved to Hollywood to Join the Paul Reiser Show

The 46-year-old voiceover artist and stage actress ended up in Hollywood to take on the role of Paul Reiser’s wife in the NBC sitcom The Paul Reiser Show, which did not fare well with television fans, leading to the early cancellation of the show, and causing Amy to seek work elsewhere. Instead of running back to where she was comfortable, she decided to stay and make it work, and the rest is history.

3. She Appreciates Her Late Success

Amy has admitted that she is happy that this level of fame did not find her earlier in life, because she would not have been emotionally mature enough to deal with it all. She says that when success finds you later in life, you are much more grounded in your craft and in your life. The freedom and confidence that is associated with this grounding is what ensures that you remain level headed and you don’t implode.

4. She Is Built for the Role

Landecker’s experience in acting has created a person who is extremely confident and comfortable in her skin, which makes her ideal for a role that called for her to be so exposed during the first season, both figuratively and physically. One scene has her pacing back and forth in front of a microwave eating a snack in the nude – all while complaining about her current situation. This type of exposure is nothing new for the veteran, and she takes it all in stride.

5. True to Her Craft

Being an actor can easily lead to vanity, but Landecker says that she refusing to allow her vanity to win out over telling a story that is believable for the fans. She is so committed that she made sure that her makeup artist made her look as defeated for the microwave scene as possible. She said that this was not a sexy scene, and I wanted to capture that moment while taking the sex out of the equation. This is what has made her an almost instant success with this show.