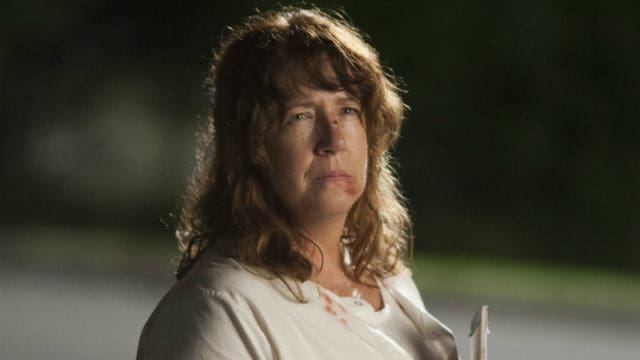 Ann Dowd has certainly developed an impressive acting resume. You can’t really say that she’s typecast, but she does a great job portraying characters with a very dark side. Her supportive work in “The Guilty Remnant,” the 2012 film “Compliance” and most recently as Patti Levin in the HBO “The Leftovers,” has been spectacular. We know that she lends believability to any role she accepts, but there is a lot about this versatile actress that we still wonder about. For fans who want to learn more, here are five things that you didn’t know about Ann Dowd.

1. Ann is extremely challenged with the role of Patti

Her acting skills are put to the test as she must portray Patti Levin, a character who doesn’t speak. A big part of acting is using verbal communication, but that’s not going to happen here. Dowd herself is a talkative person. She uses verbal and body language like a master, but she’s only got half of her arsenal available in this assignment. She’s going to have to rely completely on her non-verbal communication skills for this one. As part of her mental prep, she acknowledges that there is great power in silence, so she’s already won half of the battle.

2. She has a unique philosophy on how to deal with tragedy

Ann Dowd has learned a lot about dealing with tragedy and loss through her involvement with “The Guilty Remnant.” Acting is as much a mental exercise as it is physical. Getting into the heads of the characters is a major part of the job if it is to be done well. She learned that attachment and denial are the worst enemies of the characters and that finding a way to reduce the anxiety is perhaps the most healthy thing that a person can do to stay sane. Hearing, seeing, accepting and letting go of attachment is one of the most healthy things that a person under extreme distress can do.

3. Ann needed help to prepare for her final role as Patti

No doubt, the climactic scene involving Patti’s suicide was a lot to prepare for. She needed encouragement and Justin Theroux was right there to coach and support her. Yes, it was a big scene and it took weeks to arrive at this point, but it needed to be delivered with everything that she had to give. It was about living inside of the head of the character, doing your job and then getting back to normal outside of the character. Theroux supported her and let her know she was ready and she could do it. There’s a lot more that goes on behind the scenes than many fans realize.

4. Ann and Chris Eccleston both get weird messages because of their roles on “The Leftovers.”

Both Ann and Chris are wondering why they are the targets for end of the world messages. Both actors shared that they get e-mails and phone messages which are a bit unnerving. It seems that there are quite a few viewers out there who think that they are obsessed with the end of the world and how to prepare for it. The truth of the matter is that they were just doing their jobs as actors and playing their assigned roles. They’re not thinking about the end of the world coming any time soon as they have careers that take up much of their time and thoughts.

5. Ann Dowd sticks to her basic philosophy as an actor to be successful

It couldn’t be simpler for Dowd. Her goal as an actor is to deliver believable human behavior in the characters that she portrays. The one word that sums it up is TRUTH. She is looking for the truth in the characters with respect to what they are thinking, where they have been and how they have internalized their experiences. Understanding the truth of each character and representing it well is how she gets the job done.