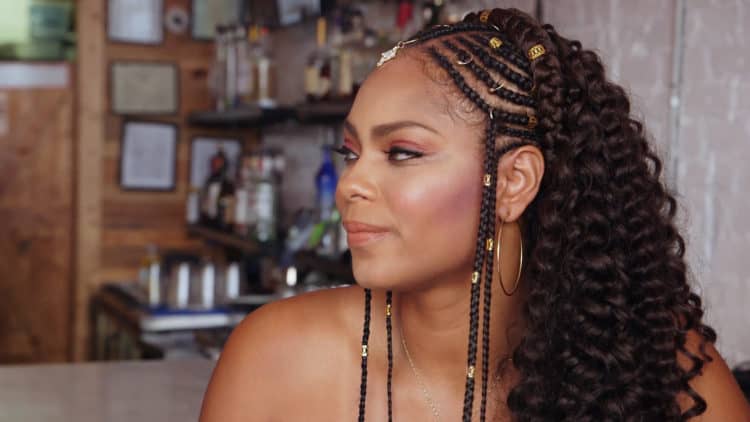 The stunningly beautiful and intelligent Sincerely Ward has traveled around the world as a model, actress, producer, and international business woman. She owns the holistic health spa CleanStart Miami and her own line of couture clothing, JetSet Culture Resort Wear. Most know her for her work with Spider-Man 3, 2 Fast 2 Furious, and Bad Boys II, and her participation in television shows such as The New Atlanta and Match Made in Heaven. She’s also one of the glamorous ladies on the new E! show WAGS Atlanta, where she’s certain to be a hit.

Sincerely was featured on a Dillard’s billboard in Times Square.

She posted on her Facebook account that she was certainly proud to represent Dillard’s in the ad campaign. The billboard was located near the Times Square Western Union, however, and she started to get “random” phone calls from people who said that she was suddenly on their minds. People were calling her without notice, and she finally began to ask them, “Are you at the Western Union?” and sure enough, she posted that about 80% of the time, they were. The unexpected calls came in all the time while the billboard was up.

Sincerely has worn Bezuidenhout creations for many social events recently. She wore a drop-dead stunning, partially see-thru lace and net gown at the birthday celebrations for Ambassador Andrew Young at Phillips Arena. She also wore a stunning red strapless gown with festive birds at several political party events with the Congressional Black Caucus in Washington DC, Chicago, and California.

Sincerely served as the Judge for Kids Got Talent in Decatur, Georgia.

The meet and greet was open to all kids who were interested in auditioning. The call out was to singers, dancers, rappers, poets, and all artists. Talented kids were welcomed to show their skills and get the chance to work with the Virtual Adrenaline Productions talent agency. The event opened possible opportunities for many youth who particpated in the event. The showcase was hosted by Summerella and Michael Majesty.

Sincerely has her own resort wear collection.

It’s called Jet Set Culture, and it ties in with her work with private jet rentals. In June, she presented a fashion show titled “Garden Party Preview” at The Runway at PDK private airport (the DeKalb-Peachtree Airport). The collection featured beautiful models in the fashion show, and open bar with Dusse cocktails, Fiji Water, and light bites, plus the chance to mingle with some private planes, exotic cars, and great company. Attendees were welcomed to wear summer garden chic attire.

Sincerely was a carnival queen in the 2017 Trinidad Carnival.

She was dressed head to toe in feathers, and just enough jewels, ribbon and fabric to create an alluring bikini-like outfit. Her entire costume was glittery gold, with brightly colored jewels skillfully applied on her bikini parts. She had a crown of bright melon-colored feathers and father fans for each hand She danced along with her trio of parade partners, on golden sandals made with the thinnest straps, ever. She was stunning, and topped off her wardrobe with a perfect smile.