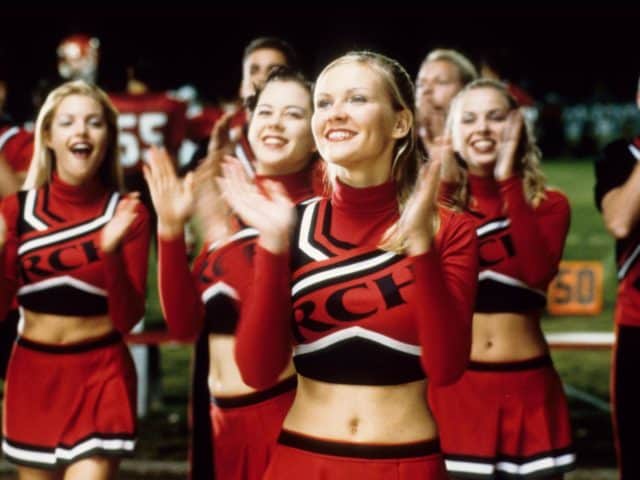 In the movies cheerleaders are almost always the popular girls, the ones that walk around looking perfect at every moment and are the absolute star or associated with those that are. They’re perfectionists whose lives are a mess behind the scenes and will always be found dating an athlete. The common misconceptions about cheerleaders in movies is that they are essentially flawless or undeniably humorous. Few things in a movie concerning cheerleaders are ever completely real and the one thing you can count on is that they will be somehow elitist, almost always stuck up in some manner until they learn their lesson, and will always have some internal struggle that they’re going through.

He-lloooo! They’re not all like that, especially not in high school.

They aren’t allowed to discriminate and shouldn’t be doing so in the first place. The only reason that a lot of those cheerleaders you see are in good shape is because the workouts they do are intense. Plus, being in shape allows a cheerleader the ability to do a lot more stunts without that much difficulty.Â  But that doesn’t mean teams don’t have cheerleaders of all shapes and sizes.

For professional, all-star, and college squads this might be okay but for high school it’s usually a big no-no. I’m not entirely up on the regulations of cheerleader outfits but usually the judges will start taking points off during a competition, or disqualify a squad entirely, if they are not wearing the appropriate uniforms. In high school it’s about the skill and the spirit, not the amount of skin that the girls are showing.

3. Their cheers aren’t all super-cheesy.

Some of the cheers might need a little work but a lot of them aren’t too bad. Plus think of it this way, the cheers need to be something that can be chanted in a well-defined cadence and don’t afford the cheerleaders a lot of leeway in what they can get away with. In order for a cheer to be considered worthwhile it has to fit into the routine and it has to be something that can get people pumped up.

2. They don’t wear their cheerleading outfits all the time.

All that moving around tends to work up a sweat and even just wearing it all day would make those outfits a bit funky. Most cheerleaders won’t wear their outfits until it’s game day, and even then some might not suit up until the actual game time unless they’re required to wear their uniform the entire game day. If that’s the case it’s usually advised to carry some form of deodorant.

Cheerleaders get a very bad reputation for this since they are at the top or close to it in the school hierarchy as far as who’s popular and who isn’t. The problem with labeling them in such a manner however is that a lot of them are still nice, down to earth young women who are doing something they love to do. It’s not fair to judge them all in the same manner.

I will say this, dating a cheerleader definitely makes people look at you differently.