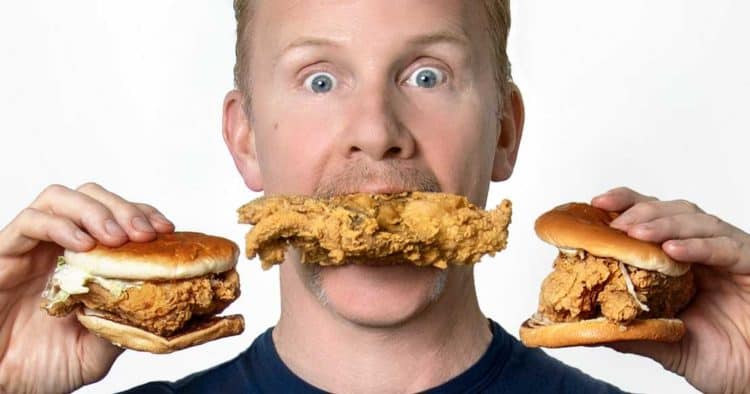 It’s hard to say that we really learned anything from the original Super Size Me, though a lot of of people might argue until they’re blue in the face about this. The deciding factor over how much a person learns is how much they really pay attention to what goes into their mouth. Morgan Spurlock makes some great points overall about the fast food industry, especially concerning the amount of literature that is and isn’t there in the actual establishments, but while his own healthy lifestyle is something that people can admit is a choice and a good one, what he seems to fail to take into consideration is that no matter what he wants to say about his movie or about the dietary habits of others, the truth is that while many people do survive on fast food a good portion of the time, there are still many more that use it as a matter of convenience and not as the norm. In this coming movie, Super Size Me 2, he’s going to be looking at chicken in the fast food industry and whether it’s really healthy or not. You can already imagine that he’s going to be bringing up a lot of points that some people will listen to and others will roll their eyes at.

Here are a few things we might learn from the movie simply based on the trailer.

5. There’s going to be a serious amount of bias in the feature.

He might state within the movie that he’s not trying to tear anything down or tell people what to do and that’s great. But his own personal bias is going to be on display without any filter and while that’s one of the main points, it’s also a sticking point for the movie since it won’t be entirely fair considering that he’ll be taking some of the worst scenarios possible only to turn around and show why his way is better. It’s true, fast food isn’t the healthiest option, even when it’s chicken, which is supposedly healthier, but the idea of someone tearing down the food choices of so many others is something that tends to divide people rather than unite them with common knowledge.

Of course not. The additives and the simple fact of how chicken nuggets and patties are made is proof that ‘chicken’ isn’t the healthiest form of food when it’s been deep-fried, diced, sliced, and pulped into something that’s seen as edible. But again, telling people this over and over is one of the least efficient ways to really get their attention since not only does it make a lot of people defensive, but it tends to cause one’s message to be lost in the constant rhetoric that emerges as a result. The educational content that is desired becomes mired in the need for Spurlock to remind us that eating fast food is unhealthy, for the umpteenth thousandth time.

3. This guy is willing to risk his health to make a point.

Some people might actually call him heroic and see him as a role model for willing to risk his health to prove a point. After all in the last movie he was quite healthy before ingesting fast food three times a day for an extended period of time. When you look at the numbers there are a LOT of people that would never even think of doing this since eventually the food does wear the body down and make one feel rather sluggish and sick. Fast food isn’t meant as a steady diet, which seems to be what he was getting at. But all the same, being lectured to isn’t really what a lot of people are looking for in a documentary.

2. There are healthy alternatives to fast food, it’s a matter of cost and choice.

He’s all about teaching people what other alternatives there are to fast food and that’s laudable since it’s very true that a person doesn’t have to subsist on junk food all the time. There are so many other healthier options out there to pick from that even the low prices of a hamburger, in relation to good food, shouldn’t be a deterrent. The manner in which he goes about it however seems a little preachy at times, which turns a lot of people off.

1. Harping on people about staying healthy is kind of pointless.

There’s no doubt when confronted he calls this ‘education’ and even an attempt to wake people up to the health risks. The problem with this is that while some folks do dine out at fast food for every meal there are many that don’t and understand that the food they eat is far too important to be covered in grease and batter with every meal. Dominick Suzanne-Mayer from The Takeout seems inclined to feel the same way since she too seems to have tired of Spurlock’s rhetoric Trying to hammer this point home repeatedly tends to get a person ignored after a while, which makes it surprising to see a second movie being put forth.

The movie makes some good points, but overall it seems like another attempt at preaching about a lifestyle that is not the norm for every person.