Home
TV News
Five TV Dads We Wish Were Our Own 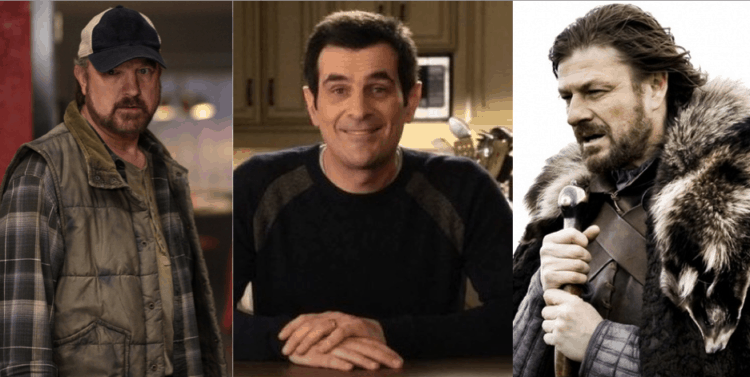 While movie dads tend to get their fair share of glory it’s usually there and gone unless there’s a trilogy or at least a sequel in the works, in which case a movie dad can go from good to evil and vice versa pretty quickly. But TV dads are a different animal altogether since if the show lasts long enough we get to see an evolution of sorts as these fathers tend to go through one change after another in accordance with the story. There have been a lot of TV dads over the course of time and a lot of them have been either great or horrible depending on their story, but one thing that a lot of them have in common is that they’re there, they care about their families, and in their own way they are good providers, protectors, and the type of men that we idolize in some way, no matter how odd it might be or how strange it might sound.

Here are some of the best TV dads that some people might wish were their own.

If you’re wondering what the hell I’m thinking with this entry then good, because Al Bundy is a bit of louse at times and he is the kind of guy that you’d distance yourself from now and then since he has a laundry list of faults that are hard to overlook. But there is one very good thing about Al and it sits at the core of his character: he’s a loyal father and husband, no matter that he wishes for death a lot of times and can’t stand his family in the best of times. He’s still there to make sure they’re taken care of and are satisfied in some way with his performance as a father. So he’s a bit rough around the edges, but keep in mind he’s still a legend when it comes to TV dads.

Honor, loyalty, and a steadfast nature that doesn’t allow him to lie, cheat, steal, or even allow a false king to sit on a throne that’s not his are all traits that Ned Stark has, but of course they’re not the best traits to have when playing the Game of Thrones. That being the case though, Ned is still a great dad since he cares about his kids and kept Jon around when his wife would have likely shipped Snow off to anywhere else in Westeros. Plus, who wouldn’t want a dad that would let them keep a dire wolf cub? That would be one of the greatest protectors a person could ever ask for, so yay dad. The foreshadowing of the stag killing the dire wolf was a little tense, but oh well.

Gomez has always been one of those dads that you can’t help but think is cool because he’s so laid back and easygoing as to be the kind of person you can talk to about anything. Of course as an Addams he’s a little devious and enjoys a good bit of unfair play and deviance, but at the same time he makes it so fun and airy that there’s nothing else you can do but laugh with the guy. Plus, he’s the kind of parent that allows his kids to do some pretty horrible things, but hey, that’s life in the Addams clan. They’re not really evil, but they’re definitely kooky and altogether spooky. Wait, that’s not how it goes….

Phil is the kind of guy that is all about having fun but is kind of a monster when it comes to being an authoritarian as was evidenced when he had to lay down the law with Alex and Haley. But he’s also the guy that doesn’t get any respect since he doesn’t act ‘manly’ enough for Jay, which means that his father-in-law ridicules him mercilessly. To be fair though, Phil does bring a lot of it on himself at times when he decides to try and win Jay’s approval and tries a little too hard. All in all he’s a fun guy that really wants people to like him but somehow finds a way to be a little too quirky at times.

I would be remiss if I forgot Uncle Phil because during one episode of Fresh Prince of Bel-Air he showed us what it was to be a man in the best way. As the saying goes, any man can help to make a child, but it’s those that stick around through the good times and the bad that get the honor of calling themselves fathers. Until you stand for something, your family being the most important, you might be a man that make kids, but that’s all you’ll ever be as Uncle Phil taught us. A father is there for his kids, even when they’re not his, and he’s there because that’s his duty and his privilege.

Admit it, you teared up a bit on that last clip, I know I did.