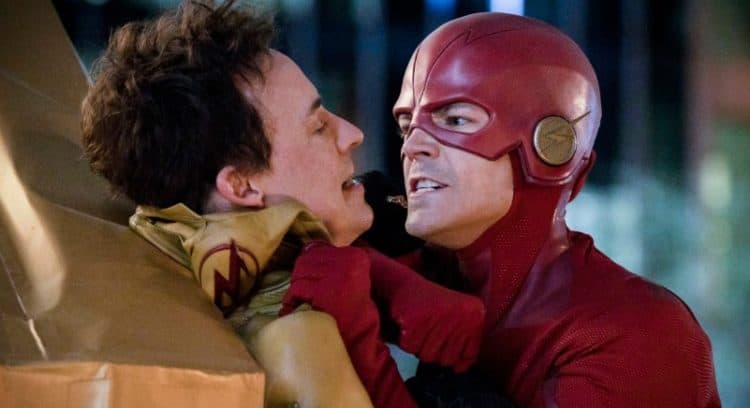 As the finale of The Flash brings this season to a close, many of us are still scratching our heads about a few things that have been left unanswered up to this point on the show. The Flash has taken us on quite a journey in the last few seasons, and season 5 had been no different. Fans have been worried about the characters on the CW favorite, with natural thoughts that we might lose some favorites this season finale. We have lost some good ones in the past, and in true CW fashion, we did lose a few characters this finale. While some loose ends were knotted, here are 5 unanswered questions that were left to ponder on until the return of The Flash with season 6.

1. Is Barry really going to disappear?

We’ve been here before. We’ve lost Barry in the speed force before during the finale of season 3. When season 4 started, we saw a team that had tried to move on without Barry. We got Barry back from the speed force but not without problems. He lost his memory; he was also wildly disoriented. Basically, he seemed insane. With the story development this season, it seems like we might lose Barry again. According to this article from Comicbook.com, Barry’s predicted disappearance had been moved from 2024 to 2019. It’s also been teased that Barry will be missing during the first part of season 6. Is this going to happen again? Are we really going to lose Barry? It seems quite a drastic move given that the CW crossover among all the DC shows is happening during the beginning of season 6. Barry and the team might have to race against time to figure out how to restore the balance with the changes brought on after the events of the season finale.

2. What’s the Reverse-Flash really up to?

It seems like Eobard Thawne will just never be gone from this show. We totally admire the talents of veteran actor Tom Cavanagh for having portrayed so many different versions of the same character in The Flash. For one, Reverse-Flash is completely despicable, but even that character manages to show us a hint of humanity in the season 5 finale. We’re fairly positive that we’re going to see him again in season 6, but we’re wondering at what capacity. The Reverse-Flash has outwitted the team so many times in the past, and we can’t help but wonder if this time around is a little different. Does the Reverse-Flash actually care about someone else other than himself? Has he grown softer with the amount of time he’s spent with Nora over the course of this season? Does he actually feel the responsibility for Nora’s death and does he care at all? There’s a chance that we may never find out, but fingers are still crossed that we might get some closure on this next season.

3. What will happen to Cisco Ramon and Vibe?

By the end of the season finale, we’re pretty much sure that Vibe was completely gone. This article from Cinemablend.com outlined how Cisco just couldn’t handle the pressures of living the double life anymore. He struggled with his superpowers even in previous seasons, and this time, he was pretty much ready to let it go. He asked Caitlin to give him the metahuman cure, and being the good friend that she always is, Caitlin gave it to Cisco. Vibe was gone. There’s a tiny percentage that he might still be around, but for now, Cisco is just Cisco. The question still remains, however. Is Cisco still going to be part of the team, or is Cisco actually leaving the team (hence the show) as well.Â  The finale might have been an open-ended write off for the character. It means that the character is still open for a revisit in the future if it works out for Carlos Valdes (Cisco/Vibe) and the storyline. STAR Labs will definitely not be the same without the wit and humor of Cisco Ramon.

4. Will Nora ever be alive again?

Future Nora, the one who came back to the past in order to save Barry, has been written off this particular timeline. It was pretty clear that the character died or simply vanished after the timeline changed. Nora West Allen has been a tremendous addition to the Flash team, and we’re surely going to miss her character. But Joe West spoke a line in the show that’s making us wonder if there might be a possibility for Nora’s return. Just after Nora disappeared, Joe said that everyone should believe in the possibility that they might see her again one day. Was that foreshadowing, or was Joe just being his usual positive self? We’d like to think that we’d see Nora again. But there’s another question of whether Barry and Iris would actually have a daughter in the future. If they did, would it end up being Nora or looking like someone else entirely?

5. Will Ralph still be part of the team next season?

We said goodbye to a lot of characters this finale–Nora, Vibe, Cicada, and Sherloque. It might have been a bit vague, but it’s possible we said our goodbyes to Ralph Dibny as well. It took a while for us to like this character, and he has really grown into a solid member of the team over the last couple of seasons. Ralph also upped his game quite a bit, and the finale kind of gave him a good send off. However, we’re not sure if he’s following the footsteps of Cisco into wanting to live a normal life. It seems that the continuation of the love story between Ralph and future Mrs. Dibny might be happening off screen during the summer break, but does this mean that we’ll be seeing a completely new team next season? We’re fairly sure that Killer Frost will be around; but we’re not so sure if Ralph Dibny is coming back for more action, or if he’s going back to the normal detective life as mentioned in this IGN article. If we did lose Cisco/Vibe this season, it might make us all feel better to see Ralph in the next.