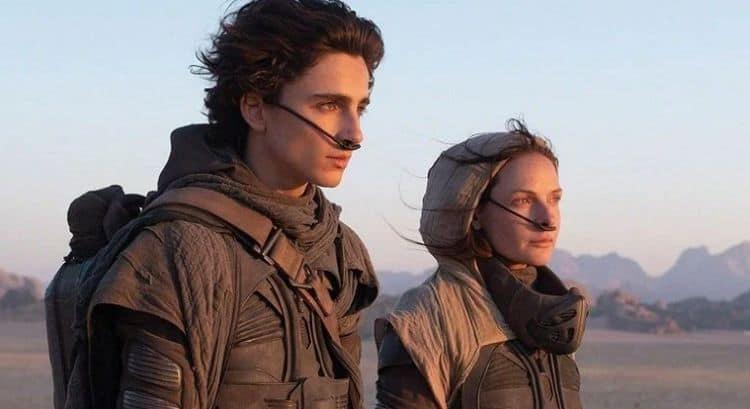 We’re midway 2021 and the movie world is slowly regaining steam after being shut off due to COVID-19. With movie theaters opening back up, expect a crazy latter of 2021 that features films from 2020 and 2021 vying for the attention of audiences everywhere. This list will count down the five most anticipated upcoming movies for the remainder of the year. The rules are simple, movies that have released a full trailer are for contention here so don’t expect Spiderman: No Way Home or Matrix 4.

This remake of the 1965 adaption from Frank Herbert was first made in 1984 under the helm of David Lynch; The critical reception to the film was mixed, but the box office numbers failed to get back the $40 million-plus that was spent to make the film. With an estimated $165 million budget, this upcoming version of Dune needs to hit the right notes with both critics and audiences, and based on the trailers thus far, the sci-fi epic has the potential to do so. First, Denis Villeneuve will handle the reigns as the director, and the veteran has done well with sci-fi epics, notably Arrival and Blade Runner 2049. Villeneuve has yet to receive a rotten tomatoes score for any of his previous films. The cast is also top-notch, with Golden Globe winner Oscar Isaac and Academy Award nominee Josh Brolin headlining a talented cast featuring Timothee Chalamet, Zendaya, and Rebecca Ferguson. The 2021 remake has all the ingredients for a fantastic film, let’s hope it lives up to its wonderful trailer.

Writer/Director Edgar Wright continues to roll out the hits, this time an intriguing psychological thriller starring Emmy award nominee Anya Taylor-Joy. The film centers around Eloise (Jojo Rabit’s Thomasin McKenzie), an aspiring fashion danger who somehow gains the ability to enter the 1960s when she meets Sandie, a wannabe singer. However, the past starts to turn into something darker for Eloise the more she goes back into time. Wright is no stranger to making excellent films, most notably the Shaun of the Dead trilogy (Hot Fuzz, At Worlds End) and Baby Driver. The lowest rotten tomatoes score for Wright is 74%, which is for Adventures of Tintin. Based on the amazing trailers, the ratings for this upcoming psychological thriller should also get high marks, and with talents such as Diana Rigg (Game of Thrones) and Terence Stamp (Wall Street) at the forefront of the picture then there’s no doubt of the high potential of this film.

An odd horror film with a chilling trailer. The production company is A24, which has spawned recent greats such as Midsommar, Hereditary, The Lighthouse, and The VVitch. The company’s track record with horror is notably strong and based on the trailer, Lamb appears to be another gem from first-time director Valdimar Johannsson. The film revolves around a childless couple (Prometheus’ Noomi Rapace and Hilmir Snaer Guonason) in rural Iceland, who makes a shocking discovery in their sheep barn. Soon, their situation takes a turn for the worse when the two defy the will of nature. Thus far, the rotten tomatoes score is over 80%, so the folk horror tale is off to a good start. We’ll see if it’ll be able to keep up the momentum once it drops on October 8th.

The House of Gucci

The amazing trailer for this film just dropped and it appears to be a strong mix of The Godfather and Goodfellas (seriously, how can you go wrong with a combination of these movies?). Add in the fact that Ridley Scott is the director, who made gems like Black Hawk Down, Gladiator, and Thelma & Louise; Let’s not forget the stellar all-star cast, notably Lady Gaga, Adam Driver, Al Pacino, Jeremy Irons, Salma Hayek, and Jared Leto. Based on the 2001 book The House of Gucci: A Sensational Story of Murder, Madness, Glamour, and Greed by Sara Gay Forden: the film focuses on Patrizia Reggiani, who was convicted of an assassination attempt against her ex-husband and former head of Gucci fashion house Maurizio Gucci.

No Time To Die

Like Dune, the reported James Bond film was originally scheduled for several different dates; however, October 8th appears to be the release date unless changed overwise. Daniel Craig’s trilogy of Bond films has been generally positive overall, with Skyfall getting the most favorable reaction from audiences and critics alike. Still, there’s no denying that Craig fits the bond character perfectly, and it helps that Cary Joji Fukunaga (who wrote and directed the amazing Beasts of No Nation) is behind the camera as the director. Throw in the stellar cast of Rami Malek, Ralph Fiennes, Naomie Harris, Jeffrey Wright, Lashana Lynch, Christopher Waltz, and Ana de Armas, and the recipe for greatness is written over the final Daniel Craig film.