Home
The Flash
The Flash and the Redemption of Harrison Wells 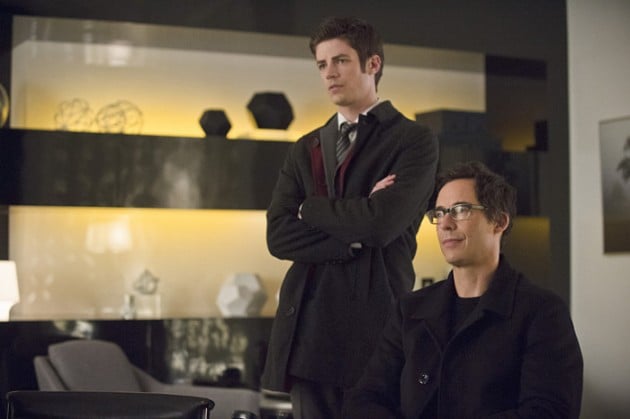 I miss Harrison Wells.Â Well, let me clarify that. I miss the Harrison Wells from the first 10 or so episodes of The Flash, when he’s mostly pretending to be everyone’s friend, helping the team catch bad guys, and we don’t realize he’s the man in yellow.

Not to say I don’t like this Harrison Wells either. Reverse Flash is obviously the quintessential villain of The Flash, and the show would be lost without that kind of major adversary.

But what if we could have both?

This is an idea I’ve been forming for a while now as we’ve seen the truth of Wells/Thawne’s origin unfold. To recap, Eobard Thawne traveled from the future and not only killed the real Harrison Wells but assumed his identity. So the character played by Tom Cavanagh has essentially been the character played (briefly) by Matt Letscher. Thawne is Wells. We’ve only actually seen the real Wells for a flashback during the episode where he’s killed.

The point I’m trying to make is this. Is there some way to separate the two characters, and give us back the Harrison Wells that was a core part of “Team Flash,” to borrow a term from Arrow? I think there is.

I’m not quite sure the kind of comic book magic it would take to separate the two entities, and essentially resurrect Wells. However, The FlashÂ is a show that has two people combine to form Firestorm, so I can’t imagine it would be all that tough of a problem to solve.

I have a hunch this is what The FlashÂ has in mind. When they cast the original Eobard Thawne, that wasn’t just some thruway role. Matt Letscher is a very experienced actor who has appeared on Boardwalk Empire, Scandal, Brothers and Sisters, and The CW’s very Â own TheÂ Carrie Diaries. I have to believe that the plan is for Thawne to retake his original form at some point.

And where does that leave Wells? Tom Cavanaugh is too great a talent for the show to lose. I’m picturing a future plotline, maybe not in the finale, but in Season 2, where Wells can come back as himself, as the actual, real life Harrison Wells. After some sort of cosmic split between Wells and Thawne, Letscher, who can again play Thawne, gets to continue on doing his villain thing, while Cavanaugh, now actually playing the real Wells, can rejoin Team Flash as a legitimate member.

There are two ways this could play out from Wells’ perspective. He could retake his body with no memory of what’s happened in the interim, which would mean that he’d be coping with the death of his wife, because to him, it would feel like it happened just yesterday. He’d also have to get to know both Barry, Cisco, and Caitlin all over again.

Or, somehow, perhaps Wells has been trapped inside his body all along. Though technically it’s Thawne’s body, which transformed into Wells, and Wells’ original body is gone, perhaps his consciousness has remained this entire time. Perhaps he’s been a passive observer, and maybe he can take control of Thawne’s body and be to at least feel like he already knows the team, meaning time wouldn’t be wasted on catching him up over the last 15 years.

If any of these ideas sound far-fetched, I think The Flash operates under an “anything’s possible” philosophy, considering we’re now dabbling in time travel and we’ve already separated one body into two with Firestorm. I’m more than confident it could happen again, and I have hunch we’re going to see both Wells AND Thawne as separate entities very soon.