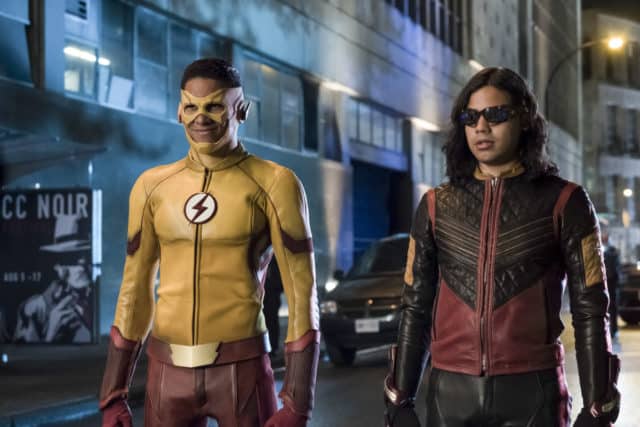 Last year,Â The Flash had one of its longest and most troublesome seasons to date, becoming overly complicated and moving away from the elements that had initially made the show highly praised by the viewers. The story had stumbled into the same old tropes and misdirection it had used in the past two seasons which became frustrating and predictable, and at the same timeÂ The Flash lost its lighthearted nature and enjoyable relationships. Although everything that occurred with Savitar felt rather lackluster, it leftÂ The Flash in a peculiar place, with Barry choosing to sacrifice himself into the Speed Force, leaving the team to fend for themselves and rise up to whatever new challenges came along. While all viewers knew Barry wouldn’t be sitting on the sideline for long, it at least took the show to a spot that it hadn’t been before, and season 4 kicks things off with a nice bang and addresses how Team Flash functions without their titular leader.

Right off the bat,Â  The Flash‘s opening episode of this season, “The Flash Reborn,” invites everyone into a world without Barry. Shockingly though, it seems like things aren’t going too badly so far and the show immediately felt like it had returned to the same form that Season 1 ofÂ The Flash had. Cisco and Wally have seemed to have nicely developed their powers and are working really well as a team to take down the bad guys terrorizing the city. The episode immediately establishes a more playful look into the superhero genre, which is something that The Flash is known for as a character, having fun while getting the job done. The opening action sequence deserves a lot of credit for the way it had Wally sprinting and leaping across the rooftops, which is (I believe?) a new way thatÂ The Flash has chosen to show off the power of either Barry or Wally. While the characters have scaled plenty of buildings, it was really nice to see such an energetic fluidity to the action. On top of this, Cisco seems to have established a great balance of his natural personality and ability to be a hero, bringing a new level of control to his Vibe abilities while having the same goofy attitude that he’s known for.

“The Flash Reborn” dives right into the idea thatÂ The Flash, as a show, has seemed to have found out what works and what the viewers want from the program, which will hopefully prove to be a good choice. On one hand, there are a ton of great callbacks in this premiere episode from the team returning to their original Season 1 outside runway to [crazy] Barry spitting out random lines of dialogue from the previous seasons. For the most part, everything seems to work out, but a lot has happened within the past season ofÂ The Flash, and hopefully the writers can find a good balance of getting things back to normal without completing ignoring their choices from the past. One of the biggest events surrounding this is the quick return of Caitlin. Â After her dramatic claim at the end of Season 3 to be neither Killer Frost or Caitlin Snow, Season 4 wastes no time in re-adding her to Team Flash without skipping a beat. The episode quickly reveals that there is still some uncertainty with her powers, but the show still has a lot of ground to cover before Caitlin’s character arc and story can truly be trustworthy and considered a good thing.

HopefullyÂ The Flash is able to balance out its consequences though, because at the same time, the show seems to recognize that it doesn’t fully work with essential pieces like Barry and Caitlin sidelined. With Barry stuck in the Speed Force, a big question coming into Season 4 was exactly how long Barry would be out of the picture for. While it wouldn’t have been surprising to still see Barry in scenes of the show, his return to Earth and working with his friends was an unknown. However,Â The Flash chose to bring Barry back in the first episode, which feels like a good choice because as great as Cisco and Wally are, Barry is the team’s glue. These character’s all orbit Barry and feed of of his energy as The Flash, and none of them can ever live up to the amount of passion and belief he brings to the show. One of the biggest feelings that the show had lost in the third season was who Barry truly was as a character and what he added to Team Flash outside of having super speed. Season 3 Barry was acting impulsively and selfishly, which put the character into a really bad spot; yet, seeing everything happen without the character just didn’t feel right in, “The Flash Reborn.” Again, it feels like a good move that the writers decided to bring Caitlin and Barry back so quickly, but at the same time they have displayed that there are still some missing facts to their stories.

Overall,Â The Flash felt really good in its fourth season premiere, getting back to the show’s roots and moving away from all of the poor choices within Season 3. The team feels compact and less complicated with the inevitable conflicts making logical sense. The decision to bring back Barry and Caitlin is definitely a smart one because it reiterates the show’s tone and keeps the core group of Cisco, Caitlin and Barry together, which works perfectly. However, at the same time,Â The FlashÂ is not ignoring the choices that it has made in the past, and will take its time in explaining everything. The Thinker seems like a fun villain, which will hopefully add to Season 4 and provide a very calculated and intelligent antagonist similar to Eobard Wells in Season 1. IfÂ The Flash can deliver on everything it has set up in this premiere, it has a chance to re-prove that it can hang with the best DC TV shows currently out there.

– Insane Barry was a lot of fun, well acted by Grant Gustin and seems like he must have had a blast temporarily playing the character like that as well.

– As cheesy as it comes across, I love that Barry’s love for Iris transcends space and time and snaps him out of his insanity.

– The only thing that this episode was missing is a Harrison Wells….. Having him in any form would truly complete the show… I miss him )’: