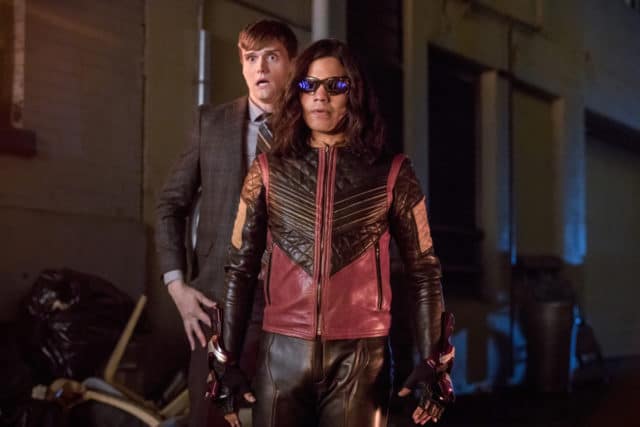 With how many characters departed last week’s episode ofÂ The Flash, the show really wasted no time in filling in the gaps on the team. As the CW’s DC television showsÂ  progress deeper into their stories, it begins tough to fully balance a long 23 episode season. In the past,Â The Flash has really struggled with providing a good balance of the season long story and the week to week plots going on. There always seems to be something off, whether it’s the characters feeling like they have abandoned their traditional and well-established personality traits or using cheap tactics to tease a big reveal that never comes. This season,Â The Flash has been doing a fairly good job of balancing everything out so far, and not diving in too quickly. Last night’s episode, “Elongated Journey Into Night,” continued to provide more of the same.

One of the more interesting events of the episode was that it felt relatively dialed back in terms of the lighthearted nature the show has recently been implementing more than usual. Obviously Cisco’s plot with Gypsy and Breacher was a ton of fun, but for Barry the episode became pretty personal. Anyone who followed the casting news leading up to this new season was aware that the Elongated Man (a.k.a. Ralph Dibny) was getting introduced; however,Â The Flash made a really nice decision to explore the character’s past with Barry and Joe. For how much humor has been inserted into season four of The Flash, Dibny’s involvement forced Barry out of his recent happy zone and temporarily back onto the death of his parents. The episode presented a really great story of acceptance and evolution for both Dibny and Barry.

For Barry, he needs to reassess the pastÂ Â and learn to grow while also helping those around him to grow. It presents a really nice lesson for the hero to have to grasp, because it becomes another way he can help make the world a better place. In Dibny’s case, it allows him to rediscover and pursue an honorable career path that he once truly loved. Sure, there was a point where he went a little off the book, but as the episode explains, he made those decisions with good reason.Â The Flash seems to really be diving into a season about redemption with these characters and others like Caitlin, which forces them to face their past mistakes and accept the decisions with the ability for a new and brighter future ahead.

This episode was a nice change of pace forÂ The Flash and finally felt like it helped move the season along a little bit. The introduction of Ralph was fun and nailed the tone that the characters seems like he will bring to the team going forward. It’s nice that the show is having these characters face their demons, because it humanizes them and gives life toÂ The Flash moving into the season. The Thinker continues to operate from the shadows, but now Barry has connected his name to everything going on, so it feels likeÂ The Flash is beginning to accelerate into the season.

– Holy crap Danny Trejo was incredible. That was the perfect role for him to be placed in for this show because it let him be normal Danny Trejo and made complete sense for Gypsy’s dad.

– Cynthia eh… I’m glad the show finally revealed her name because it just makes her and Cisco’s relationship a little more personal and I like them a lot as a couple.

– The scene celebrating Joe’s pregnancy was hilarious. That’s all I have to say about that.