Home
The Flash
The Flash Season 3 Episode 19 Review: “The Once and Future Flash” 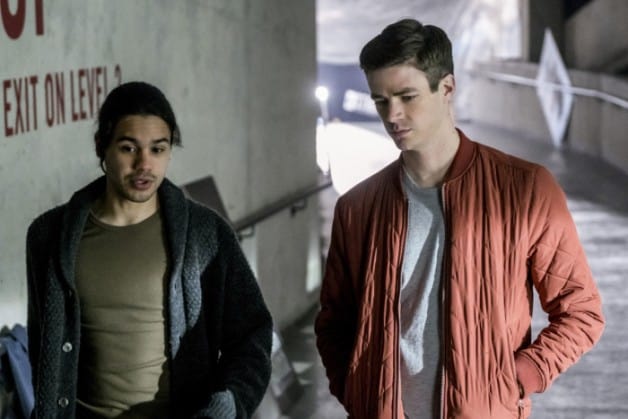 Going into the final long break of the season,Â The Flash was setting up some really nice stories and had nailed the threat and presence of Savitar. Team Flash has been pushed further than ever and could possibly see some permanent damage thanks to the speed god. However, unlike it’s CW counterpart,Â Arrow,Â The Flash has refused to reveal the identity of Savitar. While it feels like the writers are attempting to build up Savitar as a villainous presence, trying to take the focus off of the character’s identity, waiting overly long isn’t helping either. “The Once and Future Flash,” continues to tease fans, but at least keeps the villain out of nearly the entire episode and puts the emphasis back on Barry and his most important relationships.

The Flash has definitely been back and forth this season, and a lot of that has been due to feeling pretty unbalanced at times. The show has done a really nice job of pushing Barry to his limit and getting him to pay attention to the rules of being a speedster, but had drifted off at points and really forced Barry to be selfish and immature. Leading up to the death of Iris, there has been a lot of emphasis on her and Barry, but the team has been really split up otherwise. “The Once and Future Flash,” put complete focus on Barry, Team Flash and how all of the different members are going to react to being beaten by Savitar. Barry has always been the team’s glue but it looks like he forgets that after losing Iris.

As mentioned before, Barry has been really selfish this season, and seeing his character in the future echoes that idea. Barry promises Iris that he won’t abandon Joe yet he has blocked everyone out of his life. Future Barry is definitely right, he has no idea what it is going to feel like to lose Iris. Yet, what Barry has to realize is that he won’t be the only one grieving and he has to utilize the relationships around him in order to get through this and avoid letting it completely ruin his life.Â The Flash putting a focus onto these friendships that Barry has is one of the key components that has been lacking too much throughout season three. There has been so much conflict between these characters that it was nice to finally watch the team function how they used to.

Something thatÂ The Flash deserves credit for this season, is coming full circle. While the individual segments of the season have felt unusual at times, it really has pushed Barry to the edge; there’s a villain he (currently) has no way of defeating, he’s struggling with the possibility of of losing Iris, and he has to balance the ability to keep Team Flash close when it’s being stretched thin. The character is dealing with a lot of heavy consequences that come from the culmination of his long-term actions. The season as a whole has done a nice job of consistently torturing Barry with all of these horrific outcomes due to his actions. Taking a look at the current future; Iris dies, Wally is comatose, Caitlin is evil, Cisco loses his hands and powers, and villains roam free in control of Central City. While there was never any promise that taking on this responsibility was going to be easy, Barry has abandoned everything he knew he was getting into from the beginning.

The Flash is a show about this amazing hero’s origin, and it’s been a lot of fun until now. Every character will eventually learn the circumstances of their job and the possible consequences of each individual action.Â The Flash has always been a really fun show with a character who operates off of feeling instead of calculation. Barry has always had fun Â and been relatively carefree but the character just needs to become a bit more serious about his job as his enemies adapt and become more and more clever. The reveal of Savitar has been built up a ton this season, which is both good and bad at this point. On one hand, the reveal could do wonders for the story if executed well; however, it could also feel lackluster and take away from everything else that Season three has nicely built up.Â The Flash shouldn’t be a show focused on the reveal of a villain every season, but should have viewers invested in the journey and growth of Team Flash, which is why “The Once and Future Flash,” was an excellent episode.

– Well, at least we know that Savitar has a nice looking leg.

– Really curious to see how everything with Caitlin plays out. I feel like right now they are giving the fans a prolonged experience of Killer Frost before they change her back or discover a way for Caitlin to control her powers.

– Well, next week is THE WEEK. We finally find out the identity of Savitar… it better be good after all this build up….