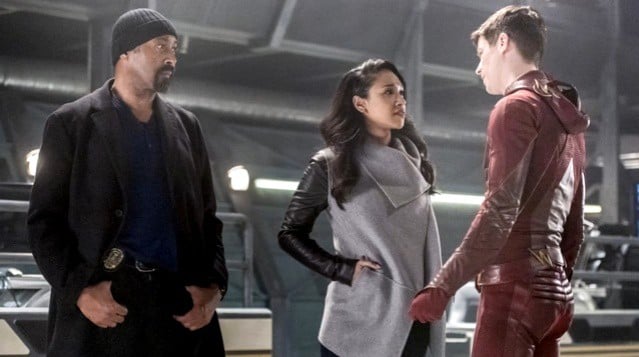 The second half ofÂ The Flash season 3 has been building up to one major moment; the death of Iris at the hands of Savitar. All of Barry’s actions and Team Flash’s efforts have been solely focused on discovering a way to outsmart the villain and come away unscathed. “Infantino Street” finally brings the show into the final Iris’ final hours and has everyone feeling the tension while trying not to make things too somber, but does a nice job of displaying how much Team Flash truly cares for one another.

One thing thatÂ The Flash really nailed last night was the decision to bring back Captain Cold for an episode, a character whose presence is definitely missed on the show. Snart is a complex character who has a really great dynamic with Barry whenever he pops up to join the show here and there. “Infantino Street,” pairs the two up for a buddy cop episode that shows just how far people will go to save their loved ones, especially Barry. It’s a ton of fun to watch how much Snart enjoys seeing Barry go a little bad, but even better when the character actually becomes the person who holds Barry back from going to far and is able to keep him in check while on their mission.Â The Flash has always handled Cold and Flash well, communicating their weird relationship that revolves around a lifelong game of cat and mouse, which is why the events in last night’s episode all felt natural.

Aside from this,Â The Flash just continues to feel underwhelming and relatively predictable. The show has been building to a moment it showed viewers months ago, but not much has changed in their approach to anything.Â Barry builds up all of this knowledge by constantly time traveling, hoping he can outsmart himself only to always fall short until the final moments. His character continues to just come off as being selfish and lackluster by ignoring his loved ones.Â The Flash has just made Barry an unlikable character in most cases because he continues to operate all over the place. While the show definitely hits all of the right emotional notes, displaying the awesome chemistry that this cast has built up, it can no longer cover up for the basic feeling stories that are now hugely telegraphed to the audience.

Last night Barry willingly tells Cisco to travel to a battle where he knows Caitlin will freeze his hands off, taking away Cisco’s abilities forever, wasting his chance to fix things.Â The Flash just becomes predictable at this point and feels like it has no stakes. Sure, there is one episode left, but it’s easy to put together how everything will work out perfectly for Team Flash. The show doesn’t have the guts to follow through with a bold move like Iris dying, Cisco losing his powers or even keeping Caitlin evil.Â “Infantino Street,” tries to build up suspense but only ends up showing it’s hand to every player at the table. Clearly H.R. used the technology introduced at the beginning of the episode to take Iris’ place, sacrificing himself after he stupidly ruined everything. The show even goes as far as to make sure viewers receive a close up of Joe on top of the building, whereÂ The Flash made sure to consistently show H.R. and even address it as a part of the future that had changed at one point. On top of this, it’s also clear Caitlin is going to find her way back to the team, altering her entire battle with Cisco. Once again, the show conveniently previewed their big battle and has built towards it, but leaves the viewers with a cliffhanger in what should theoretically be Cisco’s final moments. While nobody wants to see Cisco lose both of his hands,Â The Flash just isn’t fooling anyone with it’s cheap build up.

“Infantino Street,” is another frustrating installment for The Flash, that feels like it’s killing time before the reveal of how the team defeats Savitar. Last night’s episode was full of emotional moments that brought out some great scenes between multiple characters, but it just doesn’t feel as fulfilling anymore when it’s clear Iris isn’t going to actually die. The show shouldn’t kill her off either, because Iris is a really great character; however, The Flash needs to stop backing itself into these corners where they leave the viewers in a position where they can breathe a sigh of relief before the finale has even come. There is just no longer any suspense in the show’s stakes and build up, which makes a lot of it’s content feel like filler to get to specific moments and althoughÂ The Flash delivers plenty of touching moments in the penultimate episode, the show stills feels like it’s limping to the finish line.

– RIP H.R., definitely was a super lovable Wells. His inspiring personality will be missed.

– Really loved Barry sending Cisco to the place he knows will cause him to lose his hands… but we know that’s going to change as well.

– I feel likeÂ The Flash has just completely lost itself at this point… the show no longer has a balance of fun and serious, but it never gets as serious (and good) as something likeÂ Arrow while also never getting as wildly fun asÂ Legends of Tomorrow.

– Snart is also the meatiest of humans…. but I did enjoy seeing the shark fin pop up from the cold mist.