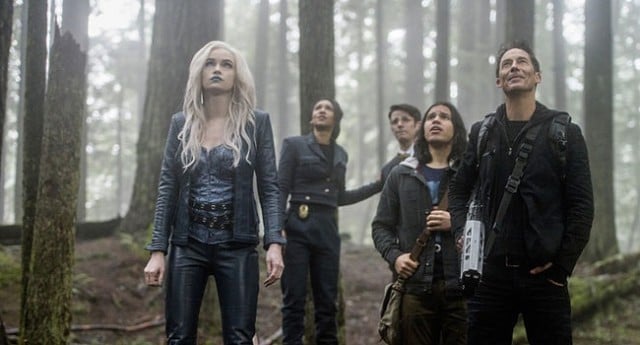 Cisco as a leader.

Before Barry Allen walked dramatically into the portal, he embraced his friends. Â He told Cisco Ramon, “These guys will look to you.” Â Remember, we got a glimpse of Cisco as the leader of huge tech company during Flashpoint. He appeared to be a bit of an arrogant jerk. Â But clearly in spite of that he still managed to rally investors, innovators and employees around his vision. Â Our Cisco has plenty of humility and kindness. Â And he has apparently learned not to just make a weapon for a villain any longer, like he did for Captain Cold’s sister. Â By remaking the Speed Force Bazooka as a skeleton key, he showed that he has learned to consider the consequences of his actions and think his way through a problem. Â So, if our Cisco can rally the team around a vision of keeping Central City safe and lead them in thinking their way through problems rather than rushing into rash action, he can be the leader of Team Flash.

Caitlyn Snow coming to grips with her powers.

There was a scene in The Flash Season 3 Finale where we saw a blonde Caitlyn or a Frost with kind eyes. Â Up to now, Caitlyn has feared her powers, presuming that madness or evil came along with them. Â And up to now that fear has lead to the Frost personality emerging. Â When we first saw Killer Frost she was a villainess with very few restraints who lashed out with her powers to hurt people and destroy property. Â Over the last few episodes we’ve seen a Killer Frost who wouldn’t kill and tried to inspire Savitar find the good in himself. Â But in the Season 3 Finale, we saw a Caitlyn who wants understand her powers and find a way to use them constructively. Â There are some qualities about ourselves that we can’t change. Â What we have to do with those qualities is find a way to channel them constructively for good.

Gipsy said she vibed across the multiverse that Cisco was in trouble and she came to rescue Cisco and aid Team Flash to defeat Savitar and Killer Frost. Â She admitted that she felt a connection to Cisco. Â In prior episodes Cisco and Gipsy have kissed and Cisco once even said of Gipsy, “I’m going to marry that woman.” Â In one way, it’s nice to see these two characters admit they have a connection. Â But we have also seen Cisco carrying a torch for Caitlyn since the first time the two characters shared a scene together. Â Caitlyn has always had someone else on her mind: Ronnie Raymond/Firestorm, Killer Frost, or more recently Julian

All the Speed Force really needs is as duty roster.

Apparently, the Speed Force needs or wants a speedster trapped inside as some kind of stabilizing element. Â We’ve seen that Savitar, Wally West and Jay Garrick can all provide that stabilizing effect. Â No doubt Jesse Quick and the speedster from Gipsy and HR’s world could also provide the stabilizing factor. Â Thus, after Barry learns and takes to heart the lessons the Speed Force is trying to teach him this summer another speedster can take his place. Â None of them should have give up weeks or months of their lives to this. Â If the Speed Force needs a stabilizer, then we just need Cisco and Gipsy to go around the multi-verse and find enough of them to make up duty roster spend half a day in there every two weeks. Â If we had thirty speedsters, each could spend half a day in the Speed Force on alternate weeks and no one would have to give up his/her life.

The Flash returns for Season 4 next fall.