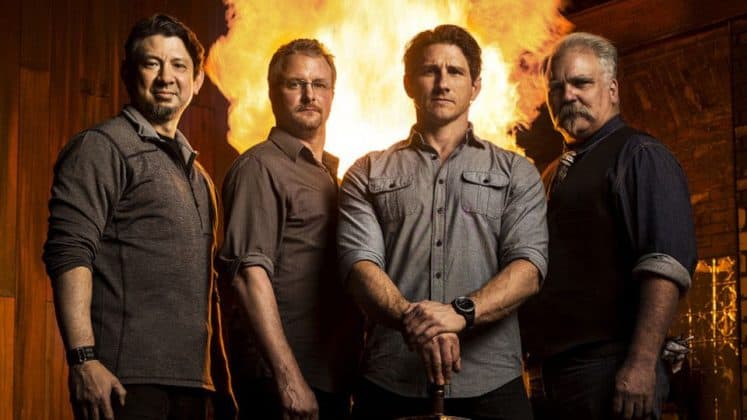 There is probably no other show that is more manly than Forged in Fire. It is, basically, a show about knives and swords. It is a reality show where body dummies are disemboweled and heroic swords, shields, and battle axes from medieval times often make up the challenge. Below are our picks for the top ten Forged in Fire spinoffs that might be successful:

1. Something that Links the Show to Cooking

You might be wondering what the connection between Forged in Fire and cooking shows is: it is quite strong actually. The first idea to create the show was made up by History Channel’s Tim Healy. Mr. Haley developed the idea once his daughter introduced a cooking show to him. He liked the thrill, and he thus decided to replicate that experience through History Channel. Mr. Tim Healy learned from American Pickers and Pawn Stars that weapons might spike ratings. He, therefore, did the math and Forged in Fire was made. That is how Healy came up with his concept: he hoped to establish a cooking show, but with a small twist to it. Instead of using weird recipes for food, participants would have to come up with very weird recipes for knives. He had a good outline; all he needed to do was fine tune it. A good spinoff might, therefore, try to link the show to cooking; this will definitely influence the number of people following the show positively.

2. Something that Links the Show to Other Weapons

While he was still thinking about it, another idea was brought up. A producer working at Outpost Entertainment, Jodi Flynn, had an idea about guns called Gunsmiths. Jodi Flynn basically wanted the show to be like project runway, only that participants will make guns; he wanted the same contestants to compete over a season. The Network, therefore, thought of merging these two ideas. The version that we view has about four different contestants every episode. This offers a richer look at the people involved in the culture. Additionally, such a system means that the show does not have to change its format often, just change the challenges every week. A good spinoff might, therefore, try to link the show to other shows that shed more light on weaponry in general. Such a show would definitely attract more viewers, especially those who love to learn more about other weapons as well.

3. Something that Includes Women

The idea of being a swordsmith favors men more; the whole concept is traditionally masculine. At one point, one of the participants compared this trade to making love. That having being said we should not assume that women are not interested in the art and that the judges do not acknowledge this fact. Following Marcaida’s own testimony, once he knew the mechanics behind the craft, he realized that the skill can be perfect by all people. Even so, Forged by Fire went an entire season without including a single female competitor. In the following season, only two ladies were allowed to brave the forge. Show-runners and producers have been sketchy while responding to this problem. Tim Healy, the brains behind the show, was quoted as saying that he does not want to add more female participants for the sake of having participants of the female gender. To this point, the few ladies that have graced the show have held on quite well. Hopefully, History Channel will think of creating a spinoff in the future that includes more female participants.

4. Something that Shows the Fans How to Forge Swords and Knives

There is no need to have a disclaimer on this show, right? It is only common sense that people should have enough knowledge to avoid forging weapons if they lack proper tools, training, and techniques. Unfortunately, that is not always what happens. Recently, a fan watched the show; he then decided to forge a weapon in his backyard. It caused a huge fire that firefighters had to spend in excess of six hours to quench the inferno. The fire might have burned more than 30 buildings, leaving quite a number of people displaced. History Channel should take this ordeal as a lesson and try to extend a bit of corporate social responsibility by giving free lessons to the fans. A spinoff that incorporates mass education is definitely welcome.

5. Something that Focuses on General Viewership

While Forged in Fire is a family show, it focuses more on forging weapons. You may recognize the show’s emphasis on weapons by its catchphrase: it will kill. A good spinoff idea should focus on more family oriented catchphrases and actions.

6. Something that Includes Comical Judges

In the spirit of making a spinoff that is more of a family show, History Channel should consider making a Forged in Fire spinoff that incorporates comical judges. The new judges should desist from making extreme remarks regarding a contestant’s methods.

7. Something that Includes Judges who know how to forge Knives

It would be fair to argue that reality show hosts are rarely experts. It is, however, a good addition to know that the judges are experts in the field concerned. Doug Marcaida, a judge on the show, does not know how to forge swords himself: a good spinoff should only contract experts.

8. A Show that Focuses on Cutlery

Forged in Fire can also be changed to include cutlery. This is not strange, especially if you know that the process of forging utensils is almost similar to the one followed while forging weapons. Additionally, most of the participants make kitchen utensils for a living.

9. A Show Where the Judges Occasionally Forge Something Themselves

A Forged in Fire spinoff should have the judges forge a weapon once in a while. The judges should take part in making the weapons to ensure that their demands are doable.

10. A Show that Caters to Kids

A good spinoff should cater to kids, and make it enjoyable to the younger generation. The spinoff should, for instance, incorporate a competition where the participants forge classic tools whose history will entice kids.