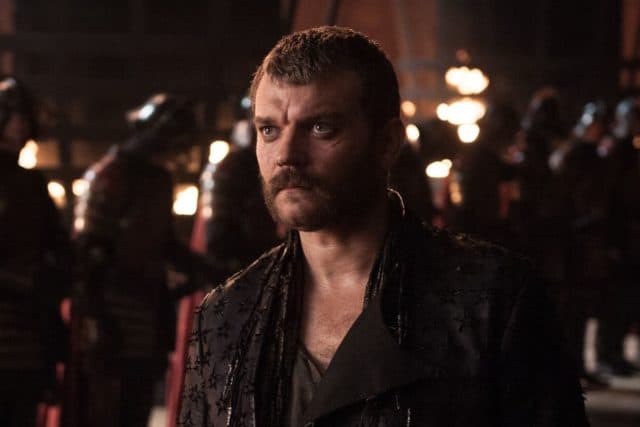 It’s so easy to be impressed with Man At Arms and the weapons they make. This time they’re taking on the task of making Eron Greyjoy’s Axe from Game of Thrones. Â If you’ve watched the show then you know just how awesome this weapon looks and how devastating it can be. You would normally think that such a heavy axe would be no good to a person up close and personal. But somehow Euron makes it work.

The design of this axe is so intense because of the overall design. It has to be completed in seven different parts due to the complexity of the form and what it will take to nail the actual form of the weapon. The first difficulty is that Euron has only shown the axe in a single episode when he was wreaking havoc on Yara and Theon’s crew. After and before that the axe has only been shown in a few, hard to find pictures.

Having to forge these pieces to fit together is exceedingly difficult it seems but the men are up to the challenge. One thing that is very interesting is that they actually ‘hot cut’ each piece so that it can fit with the other pieces once it comes time to weld them together. Watching the axe continuing to take shape is mesmerizing as you realize that these men are taking blocks of steel, heating them until they are glowing hot and then smashing them over and over into shape.

One of the hardest parts has to be the squid emblem that goes on each side, the sign of House Greyjoy. They use wrought iron for this part and the effect is simply astounding. The process is insane since they need to craft a squid emblem for each side and then weld it straight to the axe. This involves a lot of time in the charcoal forge and a great deal of time pounding each side with wooden mallets so as to get the welds right. After this it is sent off to sand and buff out the finer details on the symbols before being sent back to be tempered.

Once this is all done the axe gets another weld, that of its handle socket. This is then attached to a long, curving handle that has a piece of hickory added into the end for effect. The entire handle is then wrapped in leather to add to the look. Once that’s all done the guys go on out and test the finished product, which is simply amazing to look at and to watch in action. This weapon doesn’t just cut things apart, it pulverizes them.

Euron Greyjoy is a bad, bad man, but with this axe he’s absolutely deadly. The chances that we’ll see him wielding it again when GoT returns should be pretty good. If nothing else it would be nice to see him go up against an opponent that knows how to fight back. That particular fight should be epic.