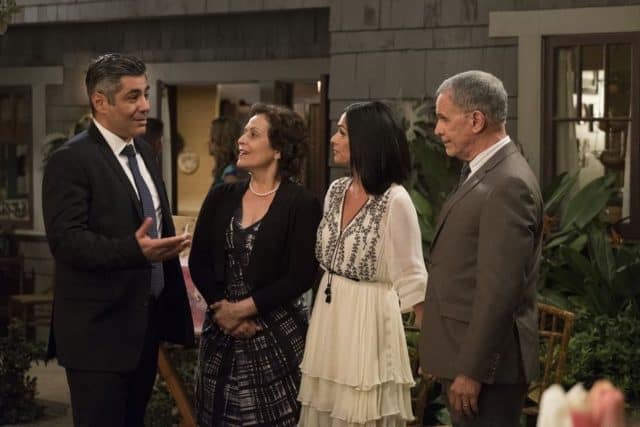 The Fosters celebrates the love of families which are anything but nuclear. Most of the time the focus is specifically on the Adams-Foster family, but this week it was on Mike Foster and the twins’ biological mother Ana. The development of their romance was both surprising and fitting. Their mutual understanding of their pasts, their vices, and their hope for the future culminated in a beautiful, mature relationship. Which is why the Adams-Foster home is the setting of Mike and Ana’s engagement party. The event is meant to be a joyous celebration, but witnessing a life change has a way of forcing others to evaluate what their next step should be.

Getting paid to play video games every day is every teenager’s dream. However, being the poster kid for gays playing video games and cutting your friend out of the deal is more than a little controversial. Jude tries to have it both ways, first by not telling people why he is being recruited, and secondly, trying to trick Taylor into giving him permission to go on his own. The “I won’t do this if you don’t want me to” argument only works if you are being sincere.

I’m really disappointed in that guidance counselor who advised Callie to consider a major in social work. Just because Callie has more experience and would therefore do better in that major, does not mean that her dreams should be limited. Would she have to work harder in a more competitive field? Absolutely, but it would be more rewarding to her in the long run. It’s also not as if she would ever give up on trying to change the foster care system. Callie is an advocate to her core, but she should have the chance to do it her way. Luckily Callie gets support from both Aaron and AJ. She can choose either route to college, and they’re confident she’ll succeed, though AJ’s belief in his ex was a beautiful gesture.

What’s a little more concerning is Callie’s participation in the UCSD campus protest. Stef and Lena would never try to prevent Callie from expressing her beliefs, but like most parents, they pay attention to what has been happening across the country. Situations which should be safe can quickly escalate. It’s actually frightening how on the nose the writers are with the timing of these episodes. If it wasn’t so personal to her because of Ximena, Callie might stay home. Callie’s known negligence, ignorance, and abuse in her short life, but she has to prepare herself for the hatred she sees from racist counter-protesters.

When you are young, it’s easy to think that your love is going to last forever. However, Jesus is pushing this belief to a difficult limit. He is putting an enormous amount of pressure on Emma to make a life-long commitment when she has so many things she wants to accomplish. They make a great couple, but Jesus thinks that love will solve every problem the future throws at them. Overwhelmed with being Jesus’s entire universe, Emma finally has to say enough is enough. Since Jesus won’t listen to reason, he dumps Emma on the spot. She has to bring Jesus back to reality, as do Stef and Lena. Jesus is no longer trying to reign in his emotions, so the time for indulging him is done.

Because both of Jesus’s biological parents are back in his life with their lives back on track, he also chooses to project his beliefs onto them. Unfortunately, he doesn’t have to push that much. Gabe does still love Ana, and after getting an apology from her parents 17 years in the making, he makes it known. Ana is always going to love Gabe, but as her first love. Mike is the one in her heart. Add to the fact that Stef and Lena don’t want Jesus to work on the treehouse while he is behaving the way he is, and Gabe has to make a change. It’s not clear if he’s running away or he’s running towards something, but Gabe decides to leave the Adams-Foster home.

Tune in for next week’s summer finale of The Fosters.

The Fosters hosts Mike and Ana’s engagement party, but not everything goes according to plan.