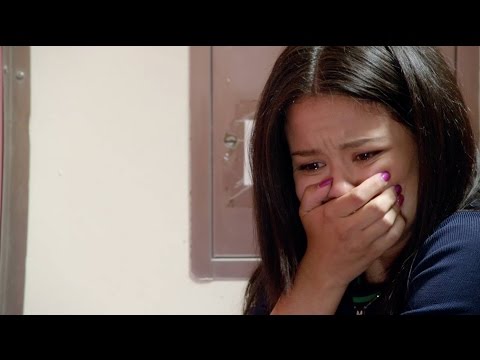 The Fosters returned with its fourth season in the middle of several high-stress situations. Season 3’s cliffhanger finale left everyone in very real emotional and physical peril.Â Though we knew that Nick’s storyline was going to take a dangerous turn months ago, this episode struck a particularly difficult chord given the recent Orlando shooting massacre. By the end of the hour the Foster family was physically okay, but make no mistake, the kids are not alright.

When we last left The Fosters, the most long-feared reveal finally came to light when Callie told the truth about her secret relationship with now adoptive brother Brandon to their moms. Their relationship may now be over, but as recently as right before her adoption the two were intimate. As expected, Stef and Lena were beyond shocked. They might actually be a bit relieved to be distracted by a more immediate concern, at first.

Nick comes to school armed. At first no one suspects anything is wrong other than Nick being a bit off. He confronts Mariana about whether or not she is cheating on him, but they are interrupted before they can finish the conversation. Mike tells the mamas that the warehouse used for the musical was torched, and slowly everyone starts putting the pieces together about the prime suspect. Nick’s father comes to campus demanding to pull his son out of school. The problem is that Nick is missing, and so is his father’s gun. Nick gave Jesus the keys to his car, which is how he and Emma end up outside campus when Lena, Stef, and Mike realize they have to put the school on lockdown.

Callie has to tell Brandon that their secret is out, but the lockdown interrupts their conversation as well. Callie and Brandon get stuck in a classroom with younger kids and an inept substitute teacher. Being in charge gives them something to focus on for the time being.Â Here the show does a very good job of showcasing the procedures for a lockdown. It’s actually heartbreaking that the students know the procedures so well, a sign of the time we live in. Jesus stays in the office with his Mom, Jude is in his classroom, but Mariana is nowhere to be found. She was too late to get to a classroom, and lockdown procedure dictates that once the doors close, they don’t open for anyone. Mariana spends the lockdown alone and terrified in a bathroom stall, leaving her mothers to panic when they Â realize no one has eyes on their daughter.

Eventually the lockdown ends and the Fosters are reunited with hugs and tears. It’s determined that Nick actually left campus before the lockdown ever started, which means he could be anywhere. More precisely, he’s at the Foster home. Stef does a sweep of the house, but the the looks of next week’s preview, it seems she missed a spot. The physical danger is not over for the Fosters, and even when it is, will they ever be the same?

Did you think the season premiere hit all of its beats? Watch next week to see how Nick’s confrontation with Mariana concludes.

The Fosters were left in a terrified, vulnerable limbo as personal complications took a backseat to a school lockdown.