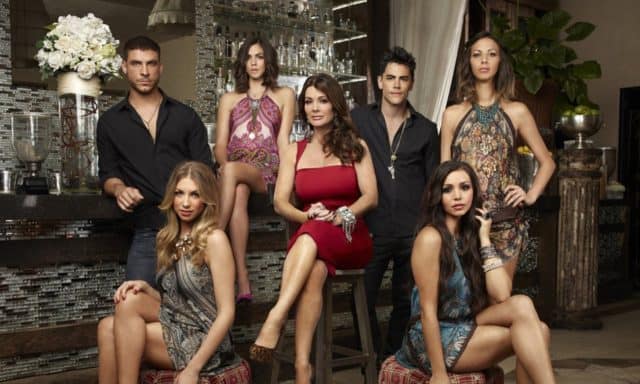 The sexy staff of Bravo’s hit shows Vanderpump Rules seem to have it all. They’re young, attractive, and work in one of the hottest and most well-known restaurants in West Hollywood. Between hook-ups, sexy photo shoots, and celebrating Gay Pride, getting a job at SUR seems like a dream come true. Here are just a few reasons why we’d kill to work at this hot spot.

This one goes without saying. From the classic staff of Vanderpump Rules first season up until present day, the main qualification to work at SUR is that you need to be hot, hot, hot! Some of SUR’s sexiest females include Stassi Schroeder, Kristen Doute, and Scheana Shay. There’s no shortage of male eye candy either with the infamous Jax Taylor, Tom Sandoval, and Peter Madrigal.

Though these veteran hotties won’t be outdone by newcomers, recent seasons of VPR have welcomed the likes of Lala Kent, James Kennedy, Brittany Cartwright, and the newest, transgender babe Billie Lee. And it’s no wonder that SUR is staffed with the most beautiful people, considering it’s owned and operated by none other than the queen of Beverly Hills, Lisa Vanderpump.

Does your office provide bagels on Fridays or team building activities? Sure, they’re nice and all but when it comes to amazing staff incentives, no establishment can outdo SUR. Each year Lisa Vanderpump hosts a SUR photoshoot where the beautiful people mentioned above get together to put on some makeup and take off their clothes.

The SUR photo shoots are notoriously sexy. Tensions were high during one of the first poolside shoots after news of Jax and Kristen having sex rocked both their relationships. Stassi and Kristen were MIA during the staff’s super sexy shoot at the bar complete with half-naked Tom Sandoval feeding Ariana grapes. At the time, the two drama-ridden ladies weren’t working at SUR and therefore exempt from the festivities. The entire SUR staff had a blast during their 1950’s inspired photo shoot where the girls wore poodle skirts and the guys embodied the Grease Lightning era.

How many people can say that getting a job could also lead to worldwide stardom? The cast of Vanderpump Rules can. Bartending, in general, is a great way to make quick cash but who knew it could lead to financial freedom? These gorgeous 20-somethings skyrocketed to fame in just a few short months.

Some of the show’s top-earning stars including Stassi Schroeder and Kristen Doute take in $15,000 per episode. Veteran Tom Sandoval’s net worth is estimated at $400,000. When you’re making that much money airing your dirty laundry, you don’t really need to weight tables or sling drinks. If fans are lucky, they might still spot these stars covering shifts and signing autographs.

SUR not only offers a world-class menu, but their drinks are to die for. As a bartender at SUR, you get the chance to not only mix up these delicious cocktails but taste them as well. Not one episode of VPR goes by without one of the SUR staff either taking a shot or sipping on a wine glass. Usually, while workingÂ

Classic champagne cocktails include Mimosas and Bellinis, but if you’re feeling adventurous, try the SUR Champagne Julep or the famous Flirtini. Tom Sandoval’s signature cocktail, known as the Tsandy, isn’t on the menu but is crafted with perfection by this VPR vet. Tom’s longtime love and fellow bartender, Ariana Madix, has taken things to the next level by crafting a cocktail recipe book. Madix and Sandoval have joined forces to provide fans with SUR cocktail recipe how-tos. This means even if you’re nowhere near West Hollywood, you can still embody the sexy SUR vibe in your drink.