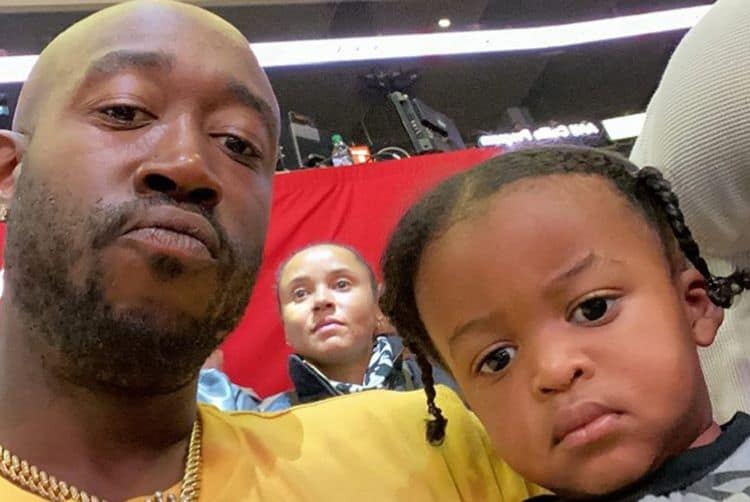 As a child, Freddie Gibbs was used to seeing pimps and crack houses down the street, so when he heard his father playing songs that talked about the familiar surroundings, it was terrific. He, however, never considered rapping as a career until he got tired of living a carefree life that involved drugs and girls. His friends were making music, and Freddie thought he would give it a try too. That ignited his passion for rapping, and he now is the proud owner of a record label, ESGN. Learn more about him through the facts below.

1. He has a restraining order against one of his baby mammas

After pitying the mother of his son by taking her in when her house flooded, the woman, Raven Tatum, got tired of being in the garage and moved her stuff to their son’s room. That did not sit well with Freddie, who had Raven’s boxes moved back to the garage. Raven was so furious that she retaliated by vandalizing the rapper’s car with a knife. She then began harassing the rapper’s girlfriend so much that he had to get a restraining order against her.

2. He allegedly wanted to kill the mother of his son and his son

A woman claimed that after she had Freddie’s son and named him Ethan at birth, the rapper asked her to change the name, which she obliged. Unfortunately, that did not mean he wanted to be part of the child’s life. According to the woman’s claims published by XXL, when she asked Freddie why he did not want to be involved in their son’s life until the courts compelled him, the artist said he was mad. She then added that Freddie sent people to kill her and her son, but the rapper did not respond to the allegations.

When Freddie was trying to get his music known, he approached several record labels hoping that they would take a chance on him. Unfortunately, none was willing, but he did not give up on his dream, leaving him to take matters in his own hands. He decided to market himself to the fans directly, not caring if any radio station played his music. Today he prides himself as among the few musicians who made it without involving a third party.

4. He is into quality, not quantity

In his 2016 BET interview, Freddie clarified that he would rather have five amazing videos than thirty mediocre projects. Therefore, he takes time to shoot a video and is also very cautious about the location because he wants his music to have meaning. Lack of a major record label backing him also made him realize that if he has to release any music, it has to be excellent lest he sinks into obscurity.

5. He was accused of sexual assault

In June 2016, Freddie was accused of sexually assaulting a woman in Austria in June 2015, leading to the rapper spending four months in prison before the charges were finally dropped. After a short trial, the Vienna regional court did not find enough evidence that Freddie had sex with the woman who had alleged that the rapper spiked her drink as well as that of her friend. According to witnesses, the two women were tipsy but could comfortably walk on their own hence the judge’s ruling.

6. He wrote most of “Bandana” while in prison

When Freddie Gibbs was arrested in France for the sexual assault charges, he was listening to Madlib’s beats. Everything happens for a reason, and the memory of those beats are what kept Freddie busy during his incarceration. Since he already had the beats in his head, writing the lyrics was easy. By the time of his acquittal, most of the lyrics were done, allowing him and Madlib to spend more time recording music.

When he talked to Self-Titled Magazine, Freddie disclosed he got into stuff he should not have been involved in during his younger days. Although he does not go into specifics, he probably meant his drug-dealing past. After being expelled from Ball University, the next thing the rapper thought of to make a living was selling drugs. However, he knew he had potential, seeing that his sister is a scientist while his brother is a doctor. He realized he had to make use of his mental capacity, thus started rapping.

8. How he came up with the title of his first album

Freddie loves sports, and ESPN is his channel of choice; thus, when he created his record label, he decided to name it “ESGN,” which means “Evil Seeds Grow Naturally.” The name is also a tribute to the blue-collar industry workers and those who have had to struggle to be where they are today.

9. He once transported drugs through a piÃ±ata

Drug dealers always invent unique ways to smuggle drugs and apart from swallowing well-packaged bags like we watch in “Queen of the South,” Rehabs.com informs us of other methods drug smugglers use. For instance, some have been caught carrying drugs in their foreskins and using trained pigeons. After a long time searching for unique ways to transport his drugs, Freddie discovered his expert way of smuggling drugs. He once used piÃ±atas to ferry the drugs, which inspired another album, “PiÃ±ata,” since he prefers rapping about his experiences.

10. He was addicted to prescription drugs

Freddie revealed that he used to be addicted to smoking weed and drinking, but he started being friends with people who were abusing prescription drugs. Before long, he also began taking them reasoning that they were different from hard drugs. However, with time, he got addicted to them and now advocates for people to avoid being high all the time because it kills them eventually.