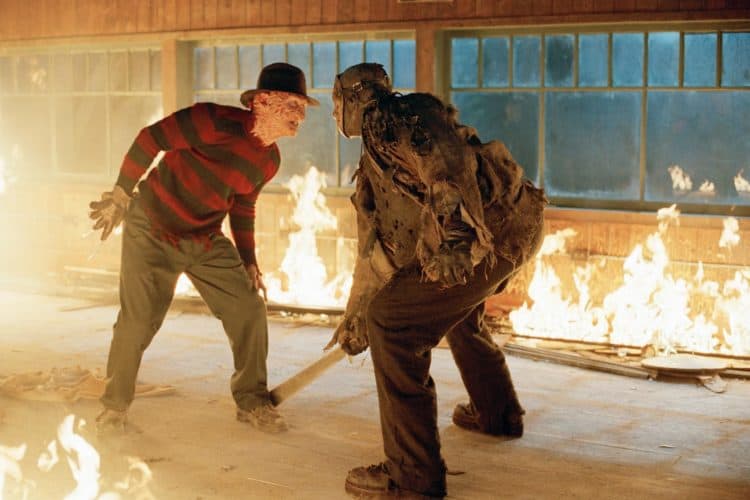 Just imagine if Freddy and Jason really could get along and become a team, no one would be safe at that point until someone managed to find a way to cancel them both for good. This musical parody set to the tune of More than Words is pretty comical since it kind of goes over what they went through in the Freddy vs. Jason movie and has Jason’s mom in the foreground to make it even better. The mention of a Freddy vs. Jason 2 was kind of funny since one has to imagine that there are a few people that would love to see such a thing come to be, or would perhaps push for something along the lines of Michael Myers versus Candyman, or perhaps a mashup of movie monsters that would satisfy those that are just hankering for a huge ensemble cast that could make it one big gore-fest that would all kinds of ridiculous. Just think about it, Freddy, Jason, Chucky, Michael, Candyman, and many other villains getting together to see who can be the best killer, and the poor humans that are stuck on the receiving end with no idea just which way to run since every movie monster comes with their own special way of tracking people down before they dispatch them with brutal efficiency.

It’s kind of interesting how Freddy and Jason were paired since there are quite a few different movie monsters that could have been put together, but somehow this pairing made sense to someone and it was pushed in a manner that eventually brought them together in a way that was pretty funny. As much as this was meant to be a horror movie, it ended up being all kinds of hilarious since it brought back a lot of the expected material that had already made the other movies either loved by fans or ridiculed by those that grew tired of both Freddy and Jason after a while. Seeing these two hook up for a massive fight was pretty cool, but everything that was used to get to that point felt a little played out at times but thankfully felt slightly inventive every now and then when it was shown just how Freddy could keep Jason on the ropes. Once it was established that Freddy was going to come out on top though the obvious and best idea was to bring him into the real world and thereby even the playing field a bit.

There was a time when both of these characters were scarier than hell, but it was also a time when people had no clue who they were and what they could do. When Freddy first came on the scene he was creepy as could be since the idea of being able to attack a person in their dreams was something that most people can’t defend against. Plus, human beings can’t go without sleeping, which means that everyone was a potential target to Freddy since once the lights go out he was bound to be there waiting. Jason was just an engine of destruction that was born from a tragedy, but it was his mother that kicked things off since she started killing campers left and right for what they’d done, or hadn’t done, for her son. Once he was up and going though, Jason became an unstoppable killing machine that just couldn’t die and therefore was the best tool that Freddy could have hoped for since his entire existence hinged on people remembering and being afraid of him. It’s strange how monsters that are so violent and so powerful still need the fear of human beings to exist. Well, some of them do at least, since Jason could care less about people being afraid of him since he was bound to keep killing as much as he could until someone finally found a way to stop him. And sending him to hell was about the only way that really worked until Freddy had to go and dig him up.

It’s not likely that another vs. movie would come along anyway since Robert Englund had stepped away from the role of Freddy and it feels fair to say that if anyone even bothered to say “I’ll do it” the fans would jump on them like a pack of rabid hyenas and eviscerate such a movie while others would attempt to get it pushed through if only because it might be kind of interesting to see how things would go. But after all that’s been done and seen by the fans, it does feel that a movie monster free for all would be kind of fun, if only because it might be able to say with some accuracy just who would be the toughest monster of them all. Or maybe it would just be another mistake.