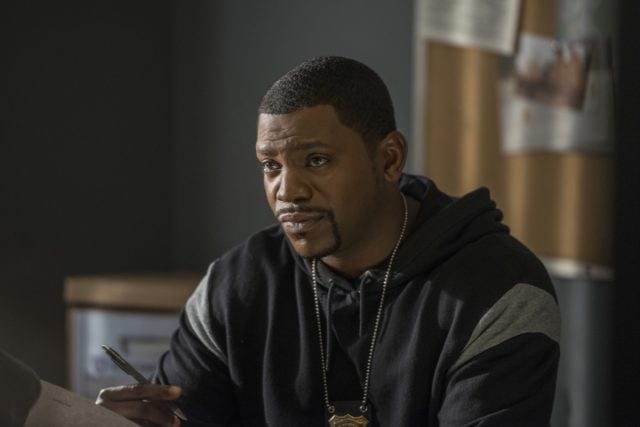 For viewers who thought thatÂ FrequencyÂ was timey-wimey before, this week’s episode, “Negative Copy,” must have been a major headache. There’s a lot of timeline changing that occurs throughout the hour, as Frank’s actions against Deacon Joe in the past affect Raimy’s present in some pretty major ways, perhaps the most significant one coming at the end of the episode as she finds Megan and her believed-to-be-dead brother in the woods outside Joe’s cabin. That’s the cliffhanger thatÂ FrequencyÂ leaves us off until next week, and it seems like more and more that this series is becoming less about hunting down a serial killer and more about the ramifications of this father-daughter duo messing with the space-time continuum.

I’m not positive if this change in narrative direction is the right move forÂ Frequency. While episode after episode going after one major antagonist can become tired, there’s a personal connection to Raimy and Frank’s hunt for the Nightingale that I don’t feel toward Megan and her brother. Sure, I don’t want to see either character hurt or in pain, but ending “Negative Copy” with Raimy finding them doesn’t make me more interested in their story; instead, it just makes me more curious about what else in Raimy’s life might be altered due to Frank’s decision to not kill Deacon Joe but arrest him on robbery charges instead. Could she and Gordo no longer be friends? Is Daniel perhaps still with hisÂ fiancÃ©e now? And most importantly, is Deacon Joe still out there killing people in 2016?

But since we can only speculate on the possible changes to Raimy’s present, let’s turn our attention over to Frank’s decision not kill Joe, which isn’t surprising but works well within the storyÂ FrequencyÂ is telling, especially after the events of “Negative Copy.” From Raimy’s regret about pulling the trigger on Deacon Joe in 2016 to Julie’s fear of what could happen to him if he gets caught to Satch’s story about the man he killed and how it still haunts him to this day, Frank has so many signs telling him not to murder Deacon Joe that it becomes quite obvious that he won’t go through with it, and it’s a smart and believable decision that totally fits with Frank’s character. Frank has been hesitant about killing Joe ever since he and Raimy came up with the plan weeks ago, and that trepidation is less about him worrying about getting caught and more about what murdering a defenseless man would do to him as a person. Due to his time undercover, Frank’s no stranger to bending the rules and making difficult, sometimes immoral choices because he has to; however, this whole season ofÂ FrequencyÂ has been about his journey home, his attempt to come back from his time undercover as a new man, someone who not only wants a life with his family but actually deserves one. To have him murder a person in cold-blood, even if it is the Nightingale Killer, would undermine his redemption story.

FrequencyÂ also does a nice job at giving Satch a little more depth in this episode, as he shares the secret of how he killed an abusive husband and father while on a call with Stan back in 1988. Satch tells Frank this story to explain why he’s had to have Stan’s back for so much of this first season, and although it’s a little too late in the game to fully get me onboard with Satch’s character now (no matter how much I like Mekhi Phifer’s performance), I do appreciate thatÂ FrequencyÂ adds more layers to him in “Negative Copy” and provides a valid, understandable reason for why he would align himself with Stan.

Over its past couple of episodes,Â FrequencyÂ has shifted its focus from the relationship between Raimy and Frank toward other parts of the show that are certainly interesting, such as the background of Deacon Joe or the consequences of changing time, but these other aspects lack the emotional punch that much of the first half of this season had. The best scene in “Negative Copy” is the one in which Raimy listens to Frank talk to the younger version of herself, and it works so well because it combines all of the great elements ofÂ Frequency (powerful tension, time travel, and, of course, emotional family drama) into one short but strong moment. Here’s hoping that in its final two episodes of the season (and probably the series)Â FrequencyÂ can deliver more scenes like that, finding the perfect blend of all its unique features and focusing on what should matter most in the series: the relationship between Raimy and Frank.

What did everyone else think about this week’s episode of Frequency? Comment below and let me know.Â

Satch shares a secret with Frank, and Raimy deals with some major life changes in an uneven but entertaining episode of Frequency.