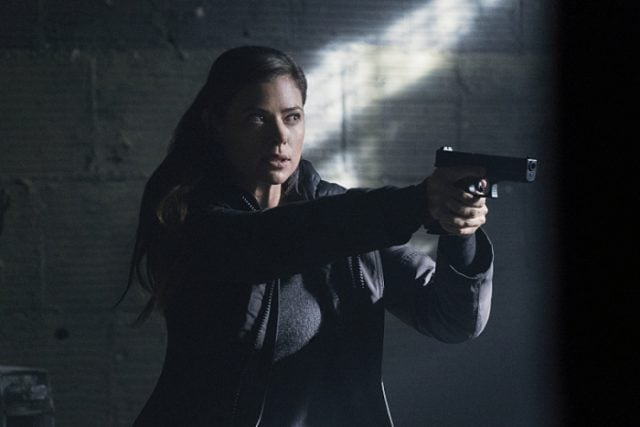 It’s kind of funny to say this about a show that’s as unique and specific asÂ Frequency, but the series already seems to be finding its weekly rhythm. There’s a couple of components that viewers can come to expect, such as Raimy and Frank’s dueling investigations and Raimy’s flashbacks to her previous life, but also room for surprises, such as the major one that tonight’s episode delivers by killing off Thomas Goff, whom Raimy was convinced was the Nightingale Killer. Looking back now on last week’s episode, which I praised for how it approached the serial-killer storyline, it was a little too early to reveal the identity of the season’s main villain, and while I wouldn’t say that I’m happy that Frequency walked back from making Goff the Nightingale Killer, I can be content with it because of how the show handled that red herring.

While I’m sure Frequency‘s writers killed off Goff in such fashion in “The Near-Far Problem” because they thought it would be a nice, surprising twist for viewers, the shock from it is the least important part of the story. Much more significant is what it tells us about Frank, as he admits to Raimy that he didn’t actually believe Goff was the Nightingale Killer; he simply went along with it because he thought she needed a distraction while dealing with the service for her mother.

This much more minor twist shows viewers that, despite the unusual circumstances that Frank and Raimy find themselves in, he’s never going to stop acting like her father. He’ll always put her needs above anyone else’s, even her mother’s. While Frank struggles to be a good father to Raimy in 1996, he knows that he can try to make up for it in some small ways by being the best dad he can be to the 28-year-old, 2016 version of his daughter. For him, it’s not only instinct but also a way of atoning for his past behavior.

However, that doesn’t mean that Frank is giving up on his relationship with Raimy in 1996. As we see during the closing sequence of “The Near-Far Problem,” Frank is now working late on the nights that he’s not watching Raimy so that he can spend as much time with her on the nights that she does stay with him. And when Frank has time available for his daughter, he’s a pretty damn good father, even if he doesn’t know what type of food she prefers at eight versus back when she was five. Raimy’s excitement over going to the movies with Frank and the big smiles on both of their faces during their short but sweet dance scene illustrates just how much she loves and cares for her father, and those scenes make the smaller, sadder moments between Frank and Raimy, such as when they hug after she asks him if he almost died or when she tells him that he’s “in trouble” before he leaves with Satch, all the more powerful.

Meanwhile, as Frank keeps trying to repair his relationships with his family in 1996, we see just how broken Raimy’s life continues to be in 2016. She apologizes to Gordo after lashing out at him in last week’s episode, and while we gain more insight into their friendship through their conversations, the fact that Raimy isn’t being completely honest with him creates a visible distance between the two friends. Sure, Gordo is being the best friend that he can be by talking with Raimy’s extended family and taking care of Julie’s memorial, but when the two of them go out for drinks near the episode’s end, it feels like we’re watching old high school pals reconnect rather than two lifelong friends sharing a beer.

Furthermore, Raimy runs into Daniel at the bar, which used to be their favorite spot to go when they were a couple. Through flashbacks, we watch Raimy and Daniel go out on their first official date and have their first kiss in a photo booth; it’s nice and sweet but it doesn’t elicit any emotion. However, Frequency finally succeeded in making me care about Raimy and Daniel’s relationship when she began rattling off all the specifics about the bar; those details, even though they’re just words and not visuals, stand out much more than the generic “first date” material, and they actually make Raimy and Daniel feel like a real couple for the first time ever on the show.

The emotional moments on Frequency, especially between Frank and Raimy, remain the best parts of the show after three episodes, but the series has also proven that it can do action and tension very well, too, especially throughout the entire Raimy/Goff sequence of this episode (Peyton List truly does some incredible work in those scenes). “The Near-Far Problem” is a lot more of the same fromÂ Frequency, but it also hints at some potentially complex problems between Frank and Raimy down the line, especially if he keeps trying to protect her like she’s his eight-year-old daughter instead of treating her like the fully grown woman that she actually is. The show isn’t firing on all cylinders just yet, which is understandable after only three episodes, but all the parts are there. And once the writers get them all to click together,Â FrequencyÂ could very well become one of The CW’s best shows.

What did everyone else think about tonight’s episode ofÂ Frequency? Comment below and let me know.

Raimy and Frank try to track down Goff in their respective times in a stellar episode of Frequency. 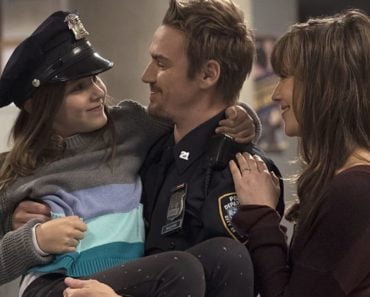