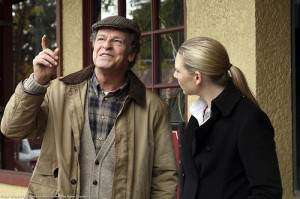 (This episode was originally called “Edina City Limits“, which I think is a perfectly acceptable name. And this was one of the series’s best episodes ever, in my opinion.)

A cop is talking to his wife on Bluetooth when he sees a young boy walking on the side of the highway near the Edina City Limits sign. He gives the boy a ride and the “I ran away from home too but I’ll bet your parents are worried about you” lecture. He looks in the rearview mirror to see if the lecture hit home and sees that the boy, Teddy Falls, has transformed from your average looking kid into a child with massive deformities.

At the station, the cop and two other officers take a photo of the kid and scan it into the missing person’s database. Two other deformed people arrive and start blasting away with shotguns. They take Teddy and leave the 3 dead troopers behind.

Meanwhile, back in Boston, Peter is unsuccessfully arguing with Walter, who won’t get out of the car and go into the supermarket. He’s afraid of being kidnapped again. Olivia calls with a case — a missing kid and three dead state troopers. Peter says that it doesn’t sound like their type of case. “Wait until you hear about the kid,” Olivia says mysteriously.

At the scene of the crime, Team Fringe discovers that the unsubs police their brass. (I’ve been watching way too many sniper movies and CSI episodes. They picked up their shell casings.) Walter says that he’s seen a boy resembling the picture. They boy played a banjo. He tries to hum the tune. Peter does it correctly. It’s the dueling banjo song in “Deliverance“. Walter saw the boy in a movie when he was with Peter. I’ve done that.

The other FBI agents make some comments about the picture but Walter insists the boy does not resemble a Sasquatch, or a yeti for that matter. Are you serious? Just because he hasn’t seen one doesn’t mean they don’t exist, Walter informs him. (God, I’d love Fringe to do a Santa Claus episode using that logic. I digress.) The file notes that the boy was picked up near Edina. Broyles tells Olivia to be safe when they go to check it out.

As Peter, Walter and Olivia walk down the streets of Edina they notice a sound that can be heard throughout the town. Walter puts words to the rhythm: Hard artichokes rarely keep, Norwegian elephants seldom sleep. He didn’t even notice himself doing it when Peter asks him about it. 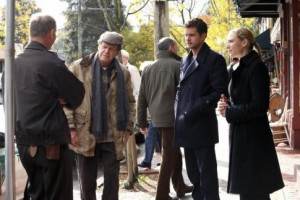 They meet Sheriff Velchik, who is amused to see that they have picked up on the Edina hum. He tells them the local military base has a honking big generator and the noise is a byproduct. When they ask about Teddy’s picture, the sheriff tells him that they have had lots of sightings and hand-drawn pictures but this is the first photo/hard evidence they’ve come across. Olivia asks to look at the pictures and files.

Teddy listens as his mom Rose and dad Joe talk about the FBI agents who came into the diner asking about the kidnapping. Rose says it was a bad idea but Joe tells her that they didn’t have a choice.

They are in the car heading out of town when Broyles informs them by phone that the troopers will killed with 12 gauge shotguns. Olivia says that most of the households in the area would have one. Peter wonders if it could be related to the military base. Looking for a conspiracy, are we? Peter admits that he never misses a chance for a good conspiracy theory. He’s also making jokes to cover his nervousness about Walter’s behaviour. Peter is afraid his father is regressing to the way he was when he was just released from St. Claire’s. Olivia says that his response (fear) is actually more normal than it ever has been.

As Peter and Olivia share more personal thoughts and theories while Walter sleeps in the back seat, they are run off the road. Peter comes to first, which is a good thing as the driver of the mystery car stops on the side of the road and walks towards their crashed car with a shot gun. He shoots. Peter grabs Olivia’s gun and shoots back. The mystery man vanishes. Peter waits; he knows the bad guy is out there somewhere. Suddenly, Walter pops up in the backseat like a whack-a-mole and asks, “Is he gone?” Peter shouts at his dad to duck and another shotgun blast goes off. Apparently not gone. Peter takes a couple more shots and it looks like he hit him. But the car on the road drives away.

The cops show up. Olivia’s got nothin’— all she saw was headlights. The cops found an abandoned car near Edina. Walter examines the area where the man ran away and finds something — a butterfly. He sends someone for his case so he can take the specimen back to Astrid. Peter checks it out and notices a blood trail (more useful but not as pretty.) They find a body in the woods. Peter thinks he shot an animal but it is definitely a man.

Peter and Olivia share some more together time when she recounts the story of the first time she ever killed someone. I half-expected Peter to say “this isn’t my first time” but he didn’t. He just stood there not saying anything.

Attendants wheel the body bag into the morgue. Walter tells Astrid that there is something for her in his case. She pulls out a jar. She thanks him for remembering that she likes butterflies but the insect in the jar is a moth. Walter is shocked. Astrid unzips the bag… and screams. It’s a monster, not a man.

What is making the bodies change back and forth between men and monsters? And why would they have done the same thing to a butterfly. Part two first — a butterfly has two distinct life stages and naturally transforms. They aren’t going to get any answers from the military. Olivia has the files and they are almost completely redacted (blacked out.) The dead guy’s fingerprints aren’t anywhere, but they do have a car registration. It/he was Joe Falls. The sheriff says he knows the name but not the man.