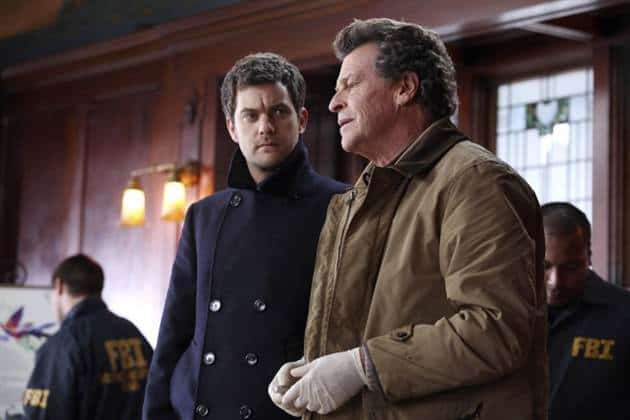 I’ll admit it; looking at the previews for this episode, I was rather disappointed. It looked to be one of the less engrossing episodes of the season, along with “Johari Window,” and “Dream Logic.” Good, but not supergood on the level of last week’s “What Lies Below.”

“The Bishop Revival” was an example of just how good Fringe can be. The episode greatly expanded the characters of Walter and Peter, while crafting a brilliant case featuring a selective toxin that could kill people with certain genetic traits (but no one else). But the best part about this episode is not only the well-structured and interesting mystery, but the fact that it managed to produce another, better mystery that was left unsolved.

The episode concerned the aforementioned virus, which was soon revealed to have been created by Walter’s own father, Robert Bishoff (he changed his surname upon emigrating from Berlin to the U.S.). Walter was able to determine that his father created the virus through his recognition of his father’s molecular signature, which resembled a seahorse (the meaning behind the seahorse glyph? Solved.). The idea of a molecular signature was explored in the season one episode “In Which We Meet Mr. Jones,” though this episode made the idea of such markers even more relevant than before.

Outside of the main characters, the best character in the episode was by far the villainous Alfred Hoffman, the bespectacled Neo(?)-Nazi who began unleashing the virus as a test for his grand plan: to exterminate world leaders at a global conference. He was no David Jones or Thomas Newton, but he was certainly one of the best one-off character’s the show has ever seen; he also had perhaps the most impact on the overall mythology of the show. After all, how did he manage to appear in 2010 the same way he appeared back during the Third Reich? (My answer: he’s an Observer — or something like it).

Unfortunately, character development outside of the two Bishops was almost completely put on hold. Broyles and Astrid were reduced to very small roles, and Olivia was prominent but wasn’t given much to do except follow Peter around. Of course, the development between Walter and Peter made these oversights small, and in fact made the episode for me. The strain that Peter and Walter’s relationship endured over the course of this episode made me wonder how horrible the fallout will be when it’s revealed that Peter is actually from Over There, especially when Peter is the angry one, not Walter.

A little more development was put into the Peter/Olivia romance as well, with Walter telling Peter that Olivia was “exactly what he needed,” in a potential partner. He then awkwardly made Peter acknowledge that Olivia was looking “lovely.” I think we should be expecting some payoff in that department of the story as well. A

Expect Featherlite’s recap of the episode to come in the next few days, and look for Fringe‘s winter finale, titled “Jacksonville,” to air next week.