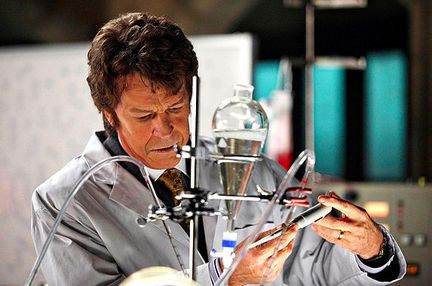 Fringe returned with a vengeance tonight. And when I say, “with a vengeance,” I don’t mean that this episode was on par with classics like “There’s More Than One of Everything” or “Inner Child.” No, I mean that it was the best episode of the series. Ever.

Before I get into the meat and potatoes of the episode, I have to say that the most interesting part of Fringe is that it has pulled a reverse LOST. While LOST‘s second season was arguably of lesser quality than the first, Fringe has only managed to get better with each episode, something that I haven’t seen in a series in a long time. In fact, every episode since “What Lies Below” has progressively gotten better and better, with each holding rank within my top 10 episodes of Fringe list. However, so far, “Peter” is the only one that has held rank within my top 10 episodes of television list.

We’ve known that Peter Bishop was from the alternate universe (known from this point forward as “Over There”) since the season one finale, “There’s More Than One of Everything,” in which it was subtly revealed that the Peter from this universe had been dead since 1985. There have been references to this point since then — Walter’s former assistant saw (but did not reveal) a glimmer about Peter back in the episode “Momentum Deferred,” which Olivia herself later saw at the end of “Jacksonville.” Of course, there was also the slip that Walter made in front of Astrid back in “What Lies Below,” saying that he couldn’t let Peter die “again.” Astrid caught this, and Walter told her than some questions were better left unanswered. However, in this episode, he showed up at Olivia’s door, telling her she had the right to know the entire story. And he told her that long, sad story.

The episode actually started with a flashback before moving into the frame story of Walter meeting with Olivia. It depicted Walter showing around a RAZR phone to top military officials, showing them technology from the more advanced Over There. He then proceeded to take them out onto a balcony and turn on a window that showed a Zeppelin docking at the balcony of the Empire State Building. Was that cool, or was that cool?

This shot cued a marvelously retro opening credits that were very different from the one that we’re used to. The credits were done in a style obviously emulative of 1980s computer animation, and featured fringe science terms that seem silly by now. Of course, it is an interesting way to look at it. Thirty years ago, personal computing was fringe science. Who can imagine what such science will be thirty years from now? That’s one reason why Fringe has potential for a remake or reboot later on: science is constantly evolving.

But speaking of science, the main part of the episode focused on Walter’s quest to save his son, Peter, from a mysterious illness. In this universe, he was unsuccessful, and his son died in arms. But in the other universe, he was successful. Walter watched his “Walternate” through a universe window and watched as Walternate discovered the cure. However, thanks to the appearance of September (our most commonly seen Observer), Walternate didn’t realize that he’d actually come very close to finding the cure. So he pressed blindly on, while this universe’s Walter realized that to keep his son from dying all over again, he would need to physically interfere with Over There.

After a spat with his religious lab assistant (whose quoting of Oppenheimer caused Walter to humorously – but angrily – compare her to a southern preacher), Walter set up a doorway to Over There at Reiden Lake, which we last saw back in the season one finale. David Robert Jones set up a doorway to Over There very close to where Walter did in this episode. However, unlike Jones, Walter’s doorway did not bisect him. Instead, he traveled over, retrieved Peter, and came back (though not after promising Peter’s alternamother that he’d return her son). Little Peter (a wonderfully cast Quinn Lord, who looks just like Joshua Jackson) knew something was going on with his strangely-acting daddy, but his concerns were interrupted when they passed back through the doorway and promptly fell through the ice.

They were rescued by September (in the incident mentioned back in “The Arrival”), who mimicked Walter’s words in the exact same way that he did Peter’s in “The Arrival.” It’s never really specified why that is.

Anyway, September saved the duo because he was the one who originally screwed up the timeline — he’d stopped by the lab to observe an “important event” and ended up distracting Walternate and “interfering.” On orders from August and December, he went back and fixed his mistake, though he disappeared after making sure that Walter could drive back to his lab and administer the cure to Peter.

Walter had every intention of returning Peter to Over There, but after seeing his wife meet AlternaPeter, his heart melted and he knew he could never return him. As Walter sadly recounts this to Olivia in the present, he hangs his head, ending the episode quietly and beautifully.

Another interesting point I want to bring up is the loss of Nina’s arm. As far as I know, when she reached out to grab Walter at the doorway, she didn’t reach through — it seems like she was caught in an in-between spot. Where her arm went or how they were able to replace it is a question that I hope will be answered, if only briefly, in the future.

The episode, as I said before, was the best episode of the series. I could go on and on about it if I could, but I know you’re probably eager to move on to another wonderful article if you’ve made it this far through the article. So, without further ado, I give this episode the obvious (and well-deserved) A+.