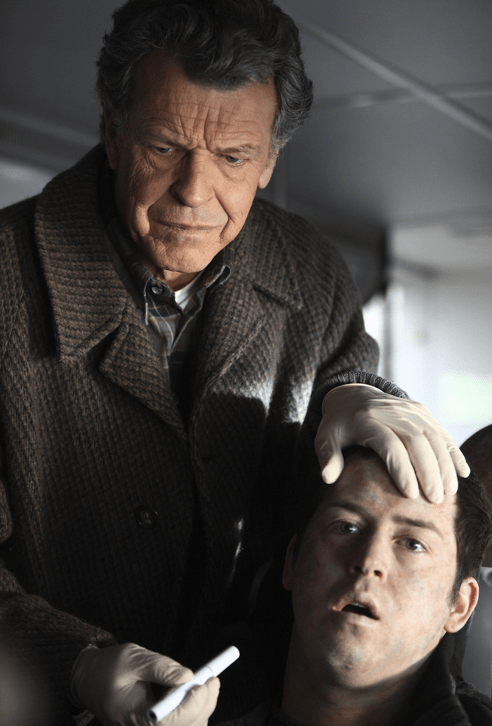 Fringe outdid itself with this week’s episode. I mean that quite literally; up until tonight, I thought “Peter” was the best episode of the series. Now, I’m not so sure. I don’t want to say it so soon after the episode, but I think “White Tulip” might be giving “Peter” a run for its money.

After a string of mythology-heavy episodes (“Jacksonville,” “Peter,” and “Olivia. In the Lab. With the Revolver,”) this episode was oddly self-contained — in fact, uniquely so. That is to say that the case that the Fringe team solved never actually happened. Thanks to the miracles of time travel, our protagonists never actually solved the case. Their efforts to stop Alistair Peck, the episode’s “villain” (and I mean that in the absolute loosest sense of the term) were erased by Peck’s time travel, making the episode the show’s most unique and brain-twisting case ever.

White I’m not going to recap the episode (my fellow scribe Featherlite will cover that duty, though I don’t envy her at all — this story was almost on a Donnie Darko level of complexity), I will hit the high points of the episode. And the highest point of the episode was the character of Alistair Peck. Not that the series regulars weren’t absolutely fantastic (John Noble deserves an Emmy more and more each week), but guest star Peter Weller really nailed the role of Peck, despite having a minimal speaking role. As Weller shared in a conference call covered by TVOvermind’s Jon Lachonis, Peck is “a guy who is going back in time and he’s making some serious sacrifices in terms of other people’s livelihood and well-being, to get back to save his wife from dying in a ridiculous moment of a mistake he made. He’s trying to find redemption, and go back to the only person who really means anything to him.”

The role was beautifully poetic, especially in his interaction with Walter. Walter, still struggling with his secret-keeping from Peter, uses his perspective to try and prevent Peck from going back and rescuing his fiance from a car crash which he feels responsible for. The dynamic that develops between Peck and Bishop is exceedingly well-written, and ends with a touchingly anonymous gift of hope from a conversation that never happened.

I also have to admit, Peck was one of the more gruesome characters that the series has introduced. He’d basically surgically turned his body into a time machine, and the make-up department of the series made that time machine look so physically painful. “He’s more machine now than man” was the first geek-inspired quote that came to mind, though I’m not sure that was applicable — Peck was as just as much man as he was machine. His actions of the episode proved as much.

One more motif that really struck me was the inclusion of Walter and his views of religion. We’d last seen his hatred toward Christianity in both “Peter” and the unaired season one episode “Unearthed.” Now, we perhaps see why “Unearthed” was cut from the line-up; it doesn’t match Walter’s post-Peter rescue feelings that he shared with Peck in this episode. Though he had been atheistic before the events of “Peter,” he soon came to believe that God was “punishing” him for his actions. So Walter began looking for a sign of forgiveness — a white tulip — from God. Though Peck believed that science was God, he still was affected by his meeting with Walter enough that he sent Walter a drawing of a white tulip; the forgiveness that Walter was searching for, even though Walter wouldn’t remember their conversation. It was a sign to Walter of forgiveness, though Walter felt that it was from God, perhaps as validation for his decision to burn the letter to Peter which explained everything. (Also, did anyone else spot the emphasis put on the cross-wearing passenger on the train? Very nice foreshadowing.)

In the end, this episode will definitely go on my top 10 list of the series (though where in relation to “Peter” I’m still not sure). The writers of Fringe continue to outdo themselves in both mythology episodes and stand-alones. This episode was better than it had any right to be, and definitely shows that after LOST goes, Fringe will become the top sci-fi series for thinkers. Because I haven’t thought this hard in a long time. A+