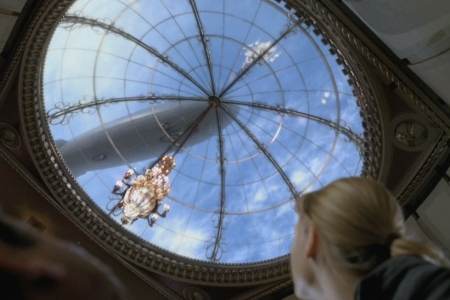 As I said before in my video review of the episode, the writers of Fringe know what they’re doing, and have known for a fairly long time. Since episode seventeen of season one, characters from Walter’s Jacksonville trials have been showing up, starting with Nick Lane in “Bad Dreams,” and continuing on through the most recent, James Heath, from “Olivia. In the Lab. With the Revolver.” Now, most viewers have noticed the significance that none of these characters have died; instead, they’ve been shipped off to deep within the recesses of Massive Dynamic (along with many other characters, whom we’ll hopefully see again).

But three of those characters finally came back in part one of the two-part season finale, though unfortunately that didn’t end well for any of them. One commenter said that they found it kind of pointless that the three of them died so soon after coming to the other side, but it was a necessary storytelling element that I didn’t necessarily mind. You see, they helped to transport Walter and Olivia to the other side — that was their primary purpose within the entirety of the series. Then they died, because if they had stuck around, it would have been too simple for them to simply return after they retrieved Peter. They’ve instead presented a challenge for the characters after their inevitable retrieval of Peter.

And I did say inevitable retrieval, because there’s no other way the story can go. They’re not going to kill off Joshua Jackson on the show; that’s the problem with such small-casted shows. Sure, you Â can kill off peripheral characters, like Charlie, but to kill off one of the main three? Preposterous! But simply because they won’t follow through with the massive destruction doesn’t mean that it won’t be a tense episode. Our Walter’s been shot in the stomach, and while he’ll probably survive, he’s going to be dealing with that in addition to the crisis. Can a man with such a fragile psyche endure that much stress alone? And how about Olivia — she’s just seen herself, and she’ll undoubtedly have to confront herself — how will that end?

Overall, the episode was one of massive setup, but it also contained the element that Fringe has learned to do so well: character development. Scenes between Peter and his mother were among some of the best scenes the show has put out, and I really felt for both of them. But one father I didn’t really feel for was Walternate, the only real loose end of this episode. Sure, he’s the Secretary of Defense, but what are his plans? According to the sheet dropped off by September, it seems like he’s wanting to destroy the universe he’s in — and his long-lost son. Why? What purpose would that serve? Even if it won’t happen, it’s going to be interesting to see how that plays out.

Also interesting — William Bell. Who is he really for? He sure was a nice guy to Olivia at the end of the episode, but his “I was too late” excuse for the crashed meeting at the bridge didn’t quite ring true. I really want him to be a good guy, but for him to be a baddie would be quite the twist. I hope he doesn’t die next week, especially considering Leonard Nimoy’s retirement from acting, but in any case, I’ll be happy to see the inevitable Bell vs. Bishop confrontation. I’ve been waiting for that since Walter discovered that Bell had started Massive Dynamic without him way back in “Pilot.”

In any case, this episode was certainly a set-up for the undoubtedly amazing finale coming up next week, but it managed to be devoid of most set-up elements; or rather, it managed to contain elements that most set-ups lack: good character development. It makes me anxious to see next week. A

Speaking of next week, I will be out of commission from Wednesday until Sunday night. I’ll be back in time for LOST, but unfortunately I’ll have no way of sharing my thoughts about this episode with you guys, bar some intervention of Wi-Fi/fate. I’ll post a video review of the episode next week, but this may very well be the last written review of Fringe that you get from me until season three. If that’s the case, it’s been a fun ride.