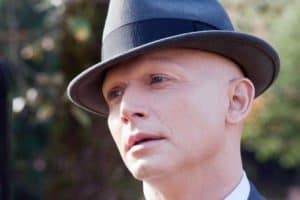 In the inaugural Fringe Friday episode ‘The Firefly,’the Observer, September, gave us a hint of what may lie ahead for Peter and Fauxlivia. Our own Sam McPherson and many other critics and fans of the show have speculated what this hint could mean for the younger Bishop and last night, we found out that they were right.

Last night’s episode of Fringe took place Over There. A place we haven’t been since the Olivias switched back to their respective universes.

So let’s check in with the alternate universe, shall we…

In the beginning of this episode, Fauxlivia is finally reunited with her boyfriend Frank who has returned home from his work with the CDC in Texas. Acting a bit strange, he questions her and she mentions she’s just overwhelmed with work especially with Alt-Broyles still missing and the search being called off. He suggests a trip for the weekend to relax which she gladly accepts.

Meanwhile, in one of the grossest cases on Fringe, a man has had a spontaneous bug eruption as bugs have eaten their way out of his body. Only the funny thing about these bugs, Skelter Beetles, is that they’ve been extinct in this universe for 10 years since their eggs are harvested in sheep, which no longer exist.

At the Department of Defense, we learn that chief scientist Brandon has been running tests in this universe using the Cortexiphan synthesized from our Olivia’s brain. Up until this point, they’ve had no luck as 9 patients have died within the first half hour following injection. Yet before the youngest patient dies, he develops telekinesis floating books and trashcans in the room. Brandon is sure that this is due to his age and mentions to Walternate that children would be viable subjects for the experiment. Showing a bit of humanity behind his otherwise creepy and evil genius exterior, Walternate says absolutely not.

Later in the bedroom with his mistress Reiko, Walternate doubts himself and wonders if he will be able to do what he needs to do to get Peter back here of his own accord, as he needs to be. She believes this doubt and worry is part of his strength and assures him that he’ll find an answer just like he always does.

It turns out a man named Dr. Anton Silva is attempting to make history and become immortal in name by bringing skelter beetles back from extinction using humans as the host for gestation. Shortly after this first man dies, another man at a diner next to Silva erupts with bugs. Only this time the bugs are bigger. (Editor’s note: the character of Anton Silva is spelled Anton on imdb.com but sure sounded like Armin during the telecast.)

As the new head of Fringe Division Over There, Lincoln has brought in Frank to investigate the case. Asking for a 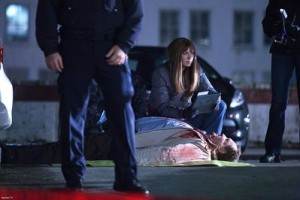 moment alone with him, Frank lets Lincoln know that he is planning to ask Fauxlivia to marry him this weekend.

Through his research, Frank has found that Silva was once very close to developing a vaccine for the Avian flu which uses the enzymes from the skelter beetle in the serum. Just as Fauxlivia is about to leave to share this information and head to Silva’s Brooklyn warehouse with Lincoln, Frank pops the question. Fauxlivia says yes.

Excited, she lets Lincoln know as soon as she sees him and they head into the warehouse to find Silva. There is something behind Lincoln’s eyes that shows he may not share in her excitement. Within moments, Lincoln gets locked in a freezer and Fauxlivia falls through the floor onto a table of beakers and beetles.

When she wakes she is tied to a chair and forced to drink water. As Silva is rambling thoughts of only needing one more human host for gestation of the queen beetle, Fauxlivia panics assuming she’s been injected with the parasite.

As Lincoln breaks free from the freezer and the rest of Fringe Division shows up, Fauxlivia is rushed to the hospital and Silva reveals that he, himself, is the host. Nauseatingly he pulls the queen beetle from his neck and asks Lincoln to make sure his name is spelled correctly in the books.

Just as Frank is about to inject Fauxlivia with an anti-parasitic medication, the EMT stops him. There are no parasites in Fauxlivia, just a growing baby.

Visibly upset at the hospital Frank asks Fauxlivia, ‘Are you in love with him?’and her silence speaks volumes. Before he walks out the door, he looks to her and says, ‘You were going to marry me.’

When Fauxlivia returns home, packing boxes line the floor. Moments later Walternate is at her door. ‘I’ve heard the news,’he mentions promising her that the pregnancy will not affect her position at Fringe Division. ‘After all,’he says with a creepy smile, ‘you are the mother of my grandchild.’Looks like Reiko was right, he may have found the answer to bringing Peter back after all.

Next week’s episode heads back Over Here. You can click on over here to read about and see the possibilities of what’s next for the two universes and don’t forget to check out Nadine’s review! Let us know what you thought about last night’s episode in the comments below!