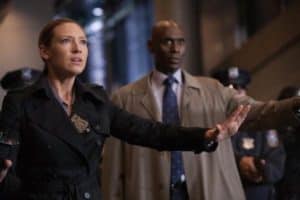 While there were many things I enjoyed about tonight’s episode ‘Forced Perspective’, after the breakneck pace of the last two Fringe episodes it felt a bit like we hit the doldrums. Don’t get me wrong, I loved that it was something of a character study and was Olivia-centric, but I found myself missing the Other Side and the mythology. That being said, I’m very glad that they devoted the time to exploring Olivia’s reaction to September’s ominous warning, and that we’re finally starting to explore the Observers again.

Being an FBI agent, Olivia has obviously had to face death and her own mortality many times before, yet I imagine having your own death predicted, seemingly set in stone, would give anyone pause. I liked that ‘Forced Perspective’took the time to examine Olivia’s struggle with trying to come to terms with the dire prediction. As we’ve seen time and time again, Olivia Dunham isn’t a person to simply let things happen to her: ever since she was a little girl, she has fought back, even when the obstacles seem insurmountable. In this way, among others, the young precog Emily (played by Alexis Raich) is eerily similar to Olivia. One of many questions I have about tonight’s episode is which foreshadowing we ought to believe: like Emily, will the very thing that gives Olivia power be the thing to lead to her death? Or are we to believe that future events are not written in stone, that the future can in fact be changed and tragedy averted? (Although given that it’s Fringe we’re talking about, it’ll probably be some impossibly mind-bending combination of both.)

As a species, humans have the capacity to experience time in a way that is wholly unique: we remember the past and anticipate the future in a way that is very different from that of any other animal on this planet. And 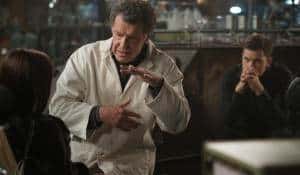 even though parsing out how effect can precede cause when we experience time as linear gives me a headache, it certainly makes for thought-provoking debates. One thing I love about Fringe is that even at its most fantastical, the cases are rooted in scientific fact. I’m not saying I believe that it’s possible to see the future, or that future catastrophes send ripples back through time, but I did like Walter’s neurological hypothesis for Emily’s ability.

Speaking of neurological issues, I also wonder why the Cortexiphan with which Nina is dosing Olivia is causing migraines when it didn’t in the original timeline. I suppose it could be the manner in which it’s being administered, since this is probably the first time she’s had prolonged exposure since she was a child; it could just be that the alteration in her neural activity — since we know Cortexiphan acts on the brain — is being interpreted as pain. Although, given that Olivia left the trials early in this timeline, it could be that this latest exposure is finishing what Walter and Belly set in motion all those years ago.

Thus far it has seemed that, in some ways, this Olivia has had things better (except for not having Peter, obviously). Even though she has had to live with killing her stepfather, she isn’t haunted by him every year; and, perhaps most influentially, she gained a surrogate mother in Nina Sharp. I’ve found the shift in Olivia and Nina’s dynamic fascinating this season and I love that the powers that be decided to take their relationship in that direction. And yet I can’t help but despise Nina right now for what she’s doing to Olivia: it just makes her betrayal all the worse, since she’s one person Olivia trusts implicitly and without reservation. That Olivia actually remembers the Cortexiphan trials in this timeline makes Nina’s observation on how much Olivia has been expected to forgive even more poignant, and I think it adds even more depth to the relationship Walter and Olivia now share. 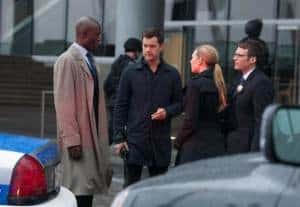 A couple more burning questions I have from tonight’s episode: what are the pills that Nina is going to give Olivia? More Cortexiphan? Or something more sinister? And how is it that the Machine doesn’t respond to Peter? It avoids one paradox, but introduces another: to my recollection, Walter built the Machine in the future so that Peter could go back in time to save Olivia. (Although I suppose with the deeper relationship between Olivia and Walter, he himself could have been sufficiently motivated by her death to alter the timeline himself.) It also raises the question of how the Bridge between the two universes was created in the first place, without someone to activate the Machine.

With Walter’s long-awaited acceptance of Peter in last week’s ‘Enemy of My Enemy’, this timeline is starting to feel a lot more like the original timeline, and I loved seeing the Bishop boys back in the lab together. I’m hoping that ‘Forced Perspective’is a way to ease us into a mythology-heavy episode next week — hopefully with more information on the ever enigmatic Observers. And from what I’ve seen of the trailer for next week’s episode ‘Making Angels’, it promises to be resplendent with Other Side involvement, so make sure you tune in! B