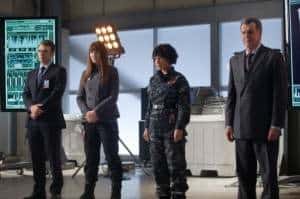 Last night’s Fringe was an episode heavily laden with mythology, yet it still managed to include some wonderfully poignant character moments. The reintroduction of Nick Lane and the other Cortexiphan kids in ‘Worlds Apart’finally revealed what David Robert Jones had in store for both worlds: Jones’plan was to use the former Cortexiphan subjects to tune into their Alternates on the Other Side in order to weaken the barrier between the universes to collapse both worlds. Although it was certainly telegraphed, I kept hoping that there would be another way to stop Jones than closing the Bridge, and I refuse to believe that that’s the last we’ll see of the Other Side.

Only in Fringe could the characters go from battling against their Alternates to fighting instead to keep the bridge between the worlds open. Somewhere along the way these strange bedfellows became not only allies but friends, and the moments between the various alternates as they said goodbye were quite perfect. I think the scene between Walter and Walternate in the hallway might just be one of my favourite of the series: the dynamic between the two elder Bishops has always been rather fraught, and yet it certainly seems as though the Secretary has forgiven Walter, even going so far as to reassure him. I found it interesting that the Observers never ‘prepared’this Walter to give up his son, like we saw in last season’s ‘The Firefly’, and yet Walter still chose the fate of the worlds over the life of his son. I hadn’t actually considered myself that turning off the Machine could lead to Peter disappearing again, and it didn’t seem like it occurred to Peter or Olivia either. 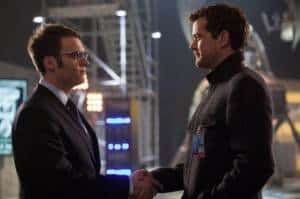 I’ve always loved the topic of the Cortexiphan trials, and last night’s Fringe was no exception to that rule. Before the timeline was rewritten, Walter seemed to have made his peace with the damage he did to the children: in ‘Over There’, we saw several former Cortexiphan subjects forgive Walter, but this timeline has offered no such recourse. The great irony is that Walter and William Bell designed the Cortexiphan and dosed the children because they believed a war was coming, and that our world would need protectors: they didn’t see it as damaging the children, but rather as making them special. David Robert Jones was able to take that preparation and potential and turn the Cortexiphan subjects into weapons.

‘The Pattern’has long been a subject of debate — and consternation — among Fringe fans, since it was a storyline that was largely abandoned after season 1. When we were first introduced to Fringe Division, Olivia and company were trying to track down and stop people who were conducting ‘experiments’with the whole world as their laboratory. If Jones was the driving force behind the Pattern, then it would make sense as to why it disappeared with Jones’death at the end of the season.

With only the two-part finale still to go in this season, it stands to reason that we’ll round off this season with the team trying to once again stop David Robert Jones. Last week’s glimpse into a possible future seems to 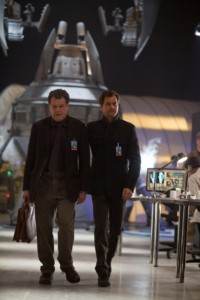 imply that Jones will indeed be stopped, but also raises numerous other questions — par for the course, with Fringe. Evidently William Bell is still alive, so will Leonard Nimoy make yet another return to the show? The implication of the future we saw was that Bell was somehow responsible for Olivia’s death: will the team make it intact through the season finale?

It was certainly a relief to be able to enjoy Fringe without the specter of cancellation hanging over our heads — I’m sure you’ve all heard by now that FOX has renewed the show for a final season, albeit with only 13 episodes. I’ve seen some frustration over the fact that we won’t have a full season, but I, for one, am absolutely ecstatic that we’ll get to see the storylines tied up in the way that the showrunners and writers want to, and that it will end on their terms. And even with the closure of the Bridge, given Olivia’s potential to be able to cross between universes, I remain hopeful that we’ll see the Alternate Universe again! Make sure you tune in next week for what I’m sure will be an explosive first part of the season finale. B+