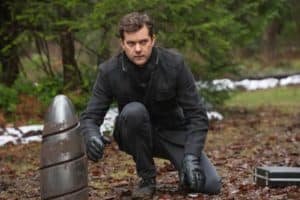 Despite its science-y weirdness, FringeÂ is a show dedicated to the superiority of love. The show argues that love is something that doesn’t adhere to the rules of science. It’s something that can bring universes together, and it’s something that can shatter them.Â “A Short Story About Love,” the March 23 episode of Fringe, is ultimately part of a much longer story about love. But does the episode serve as a representative microcosm of the rest of the series, as any episode bearing such a title ultimately should? The answer is yes, though not without a few flaws.

“A Short Story About Love” thankfully put an end to the most frustrating part of season 4 so far: the contrived mystery of where Peter is. It’s been obvious to most fans since the outset that Peter is in an altered version of his own timeline, but the show has insisted upon trying to convince us that he’s actually in the wrong timeline. That’s been the primary source of drama for the past few episodes, and it’s been about as compelling as watching a debate of whether the earth is flat or round. We know, already. But the show finally addressed that question in this episode, answering definitely that the obvious was true. Now, thankfully, we can move on.

That reveal (confirmation?) was the major mythological payoff of the episode, but that storyline was largely disconnected from the case of the week, which saw a creepy burn victim (Michael Massee) attempting to perfect a pheromone cocktail that would make women love him. As a character, the villain remained almost entirely an enigma, though the brilliantly edited scene in which he sadly listened to “The Friends of Mr. Cairo” by Jon and Vangelis did wonders in developing the character. Also nice was the fact that the character survived the episode, making him one of the few one-off bad guys not to die at the end of their respective episodes. As he sat in a police car waiting to be taken away, the villain described to Olivia his twisted-but-noble goal: to make a chemical that could allow everyone could experience love.Â “[The episode]Â was inspired by the notion that love is chemistry,” tweeted executive producer J.H. Wyman, who wrote and directedÂ the outing (making him one of the few showrunners around to have done both, and to have done both well). But FringeÂ ultimately argues that this isn’t entirely the case. The burn victim failed to replicate love through science because love transcendsÂ science.

Peter’s largely disconnected subplot served to elaborate upon this theory. After discovering a message that September left on his eye, Peter followed it to an address that turned out to be our favorite Observer’s rather pristine apartment. A tracking device found in the Observer’s apartment ultimately led to Peter stumbling upon one of the beacons, the burrowing cylinders which haven’t been properly seen since the season one episode “The Arrival” (though one did make a brief appearance in Walter’s drugged-out dreamworld in “Brown Betty”). When he took the beacon back to September’s apartment and it finally activated, it was revealed to serve as a gateway for September to escape the imprisonment that his fellow Observers had placed him in following the events of “The End of All Things.” Apparently no longer suffering from the bullet wound in his abdomen, September revealed to Peter the truth of where he was — and that Peter had been brought back because people had been unwilling to let Peter go. The Observer calls it “love.”

There’s an interesting parallel at work here.Â The beacon serves the same function for September as love does for Peter. Both serve as the hooks that bring our characters out of their extrauniversal isolation and back into this universe. But is the connection any deeper? And how is this beacon connected to the one we saw back in “The Arrival” (and what about those guys who were trying to steal that one)? Wyman promises that we haven’t seen the last of these beacons, and I for one believe him. The fact that the series is calling back to a mythological element not examined since the show’s fourth episode ever deserves applause, though, and with its reintroduction, it feels like we’re getting another piece of the puzzle.

Finally, it’s time to also direct your applause toward the acting of Anna Torv and Blair Brown in the scene near the close of the episode, in which Olivia resolved to allow her memories to be replaced by that of her old self. While there was no real question that she would do otherwise, the superb acting job by both actresses gave the scene weight it wouldn’t have ordinarily had.

Ultimately, while “A Short Story About Love” isn’t an entirely perfect episode of Fringe, it certainly sees the show ridding itself of some of its narrative burdens. It’s a transitionary episode without a doubt, but it’s a solid one that convincingly reinforces the show’s central theme that love is more powerful than any fringe science. B+