Home
Fringe 4.17 “Everything In Its Right Place” Review 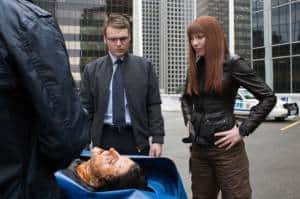 Friday night’s Fringe took its title from the Radiohead song “Everything In Its Right Place,” from their (fantastic) 2000 album Kid A. Listen to it here if you’ve never heard it before. It’s a song of hypnotic dread built around singer Thom Yorke’s repeated pleas of confusion and disconnectedness: lyrics chosen simply by the band picking a few potential phrases out of a hat. Here are the song’s lyrics, boiled down to their simplest form: “Everything in its right place / Yesterday I woke up sucking on lemon / Everything in its right place / There are two colors in my head / What was that you tried to say?”Â

After watching “Everything In Its Right Place,” the use of that song as the episode’s namesake makes perfect sense. There were two colors in Lincoln Lee’s head this week: the red and blue of the show’s two universes. In his original Blueverse, Lincoln began to find himself obsolete. The woman he loved had forgotten the defining moment of their friendship, returning a token he had given to her after the death of his partner. The token was meant as a “tether” to help her find her way to where she belonged, though her path led, ultimately, away from Lincoln. Olivia’s gaffe in returning the gift, though, came when he needed that token back the most, helping him to find a place where he was truly needed. This wasn’t done through any inherent power in the little charm itself, but rather through Olivia’s act of returning it, which seemed to be the final step in severing any hope Lincoln had of winning her love. Once this was gone, it was time for Lincoln to realize that he no longer belonged in the same place he had before.

Within minutes of (re-)receiving his necklace, Lincoln jumped at the opportunity to travel to the Redverse to present a report on David Robert Jones to the Department of Defense. He did so partially out of kindness for Astrid (who had plans), but partially out of a need to escape his current environment, which, as it had before Peter’s disappearance, had no room for him. Of course, the episode was never going to focus on Lincoln giving a boring recap of things we already knew about Jones (whose absence is growing increasingly conspicuous from week to week), and soon after arriving in the Redverse, Lincoln was dragged off to assist in a new case.

The case turned out to be that of a shapeshifter, a fact almost too convenient considering Lincoln’s obsession with the subject following the death of his partner. I shared the skepticism of Colonel Broyles, or at least I did until we were reminded that in this timeline, the Fringe Division director is a pawn of Jones. Broyles, keeping in contact with nasty alternate Nina from the week before, served as the informant whose actions resulted in the death of a beloved character. It seems likely that Broyles will exhibit some guilt for his actions in the future; something tells me the nature of his relationship with Jones isn’t all as steady as it appears to be. But more on that death later. 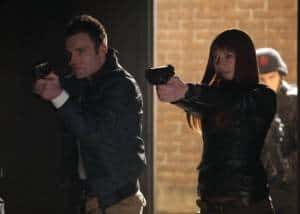 The shapeshifter, naturally, reflected some of Lincoln’s inner conflict. Like Lincoln, he was in denial about being spurned, and was still holding out hope for the fact that someone (in this case Jones) would remember him. But what it took the return of a trinket to do for Lincoln, it took a sniper on a rooftop to do for the shifter. After Olivia took the sniper down, Lincoln threw the shifter against a fence and repeated to him a lesson he had only just learned: it’s time to find your own place and quit waiting for people to do it for you.

The sniper had served to provide a serious lesson in character development to the shifter, though he had also served to take a character out of the equation: the alternate universe’s Lincoln Lee suffered a bullet to the chest and died as a result, leaving both Altlivia and Lincoln in shock. Several scenes of the episode had been spent attempting to determine the divergence point between the two incarnations of Lincoln, though none could be clearly found. Unlike many of the alternate characters, the two shared almost the exact same history, down to the minor details. What caused the divergence? Though the answer to that question was never discovered (What wasÂ that he tried to say?), Alternate LincolnÂ hypothesized that maybe it was just free will. Maybe it just took the Blueverse’s Lincoln a little longer to learn to be assertive, to make his own place in the world.

As this change finally took effect on our Lincoln, though, the Redverse Lincoln died, his purpose in the story having been filled. His death left a Lincoln-shaped gap in the Redverse — and Altlivia’s life. After transporting the shifter to the Blueverse to be assisted by Peter and Walter (who was excited to study — er, help — his new patient), Lincoln returned to the Redverse to continue his quest to find Jones and to provide comfort to a mourning Altlivia. The possibility of a relationship between the two, almost from the outset of the episode, has increased to the level of “really, really likely,” and the quiet moment between the two at the end of the episode only seems to solidify the fact that, through Altlivia, Lincoln has finally found that “tether” he had long been looking for.

Have the pieces for the show’s “End Game” (the title of the season finale, though hopefully not the series finale) been set up? It certainly seems that way. With Lincoln probably staying in the Redverse, a defector from Jones’s shapeshifters in the hands of Peter and Walter, and evil Alternate Nina in police custody, the walls seem to be closing in around Jones — though I’d wager that with Col. Broyles, his ace in the hole, Jones still has a few tricks up his sleeve. We do still have five episodes left in season four. But slowly, things are coming together. Everything is in its right place. A-

Next week’s episode of Fringe, “The Consultant,” airs Friday, April 13.