Home
Fringe
Fringe 5.06 ‘Through the Looking Glass and What Walter Found There’ Review 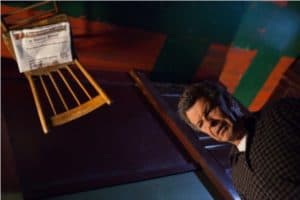 Last night’s Fringe — along with having the longest episode title I’ve ever seen — saw the team venture into a quasi-parallel universe in the continuing search for Walter’s tapes. Olivia, Astrid, and Peter found themselves having to chase down Walter after, uncharacteristically, he left the lab to venture out on his own. Twenty years ago, Walter found a way to create a pocket universe in which he could hide something undetected from the Observers. The pocket initially served to hide a young, very bald, boy; however, sometime in the interim, a mysterious friend of Walter’s named Donald had moved the boy, leaving behind a radio. We also started to see some of the effects of the Observer technology that Peter put in his head in last week’s “An Origin Story” and, although the tech let Peter successfully fight off one of the Observers, it may prove to have “grave” consequences.

“Through the Looking Glass and What Walter Found There” was more than aptly named. The pocket universe that Walter created, by opening a space in the membrane between the two worlds, looked like something designed by M.C. Escher. Or, as Peter remarked, like something Walter designed while he was tripping. The overt reference to the fascinating glyphs made a fun shout-out to the long-time fans. In case you weren’t aware, each glyph corresponds to a letter of the alphabet, and the glyphs shown at each commercial break spell out an episode-specific word. The code actually wasn’t broken until partway through season 1, when a gentleman named Julian Sanchez realized that it’s a “simple one-to-one, monoalphabetic substitution cypher.” 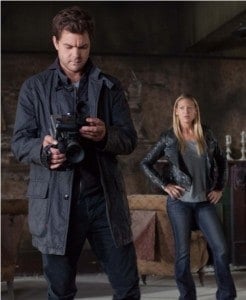 Folks who’ve been watching since the beginning may also have recognized the little boy we saw in Walter’s tape. In the original timeline, the Fringe team worked a case in the episode “Inner Child” which featured a young empathic boy who acted disturbingly like an Observer. We found out last season, in an episode also written by David Fury, that the bald Invaders are a further step along the evolutionary path from humanity. So who, or what, are the children? Perhaps they represent the beginning of the Observers as the first humans to show Observer-like traits; in which case, they could be a potential weak-spot. But how Walter found the boy, and what he could mean for their plan, remains to be seen.

The fact that Peter and Olivia were the only ones to make the connection to the boy from 2009 was a glaring reminder that we aren’t in the original timeline. It also made me wonder anew: what else might be different, and what other cases didn’t happen? I’ve seen varied responses to season 4, but one criticism — and not without merit — is that we spent a lot of time with characters who were, for all intents and purposes, not the characters we spent 3 seasons getting to know. Even though Olivia got her memories back, courtesy of the miracle drug that is Cortexiphan, and Peter was always “our” Peter, none of the other characters reverted to the ones from the original timeline. It was easy to overlook, especially once Walter accepted Peter and their dynamic stabilized into the father-son relationship that’s been a cornerstone of the series.

Speaking of references to the past, Walter’s worries about the changes he’s noticed since Etta and Simon reconnected his brain bits in “Letters of Transit” reminded me of the season 2 episode “Grey Matters.” Trying to parse out what exactly may have changed in the Peter-less timeline usually gives me a headache, but we do know that the original Shapeshifters, the mechano-organic hybrids that bleed mercury, still existed. The fact that Walter never left the lab after Olivia removed him from St. Claire’s, however, means that he was probably never kidnapped by ‘shifters, nor hooked up to his removed brain-bits. In the original timeline, that was the first time we really got a glimpse at who Walter was before his tenure in a mental institution, and at the hubris that same man wore about himself like a cloak. It’s certainly to John Noble’s credit that the change in Walter is simultaneously subtle and stark. 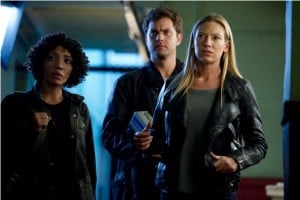 But now that the characters are changing more radically, who will we be left with, at the end of all things? Will Peter turn into an emotional void as the Observer technology takes a stronger hold? Will Walter lose everything we adore so much about his character? Etta’s death left us with the realization that, truly, no-one is safe, and this episode might just represent the beginning of the end. I can’t help but feel for Olivia, who still doesn’t know what Peter did in the name of vengeance — his penchant for keeping secrets certainly hasn’t changed. Olivia is grieving the death of her daughter, trying desperately to hold on to Peter, and now it also looks like she may also lose her surrogate father.

It may be naÃ¯ve, but I had been hoping that we might get something of a happy ending to Fringe. As much as I applaud the storytelling we’re seeing this season, this make-shift family has been through so much tragedy. And it looks like things are going to get a lot worse, before they get better. If they get better at all. Hopefully we’ll get more answers next week, along with some hint as to Donald’s identity. I can’t help but feel as though he’ll turn out to be someone we know, or knew: there’s too much mystery and significance to this character for him to turn out to be someone completely unfamiliar.

“Through the Looking Glass and What Walter Found There” felt, in some ways, like a return to “traditional” Fringe: there was a weird scientific phenomenon to investigate, Peter and Olivia had to go chasing after Walter, a mysterious bald character showed up unexpectedly, Peter and Walter had a lovely father-son moment, and the ending left us wondering what the hell they’re going to throw at us next. Grade: A.