Home
Fringe
Fringe: the Myth of Peter and the Importance of Remembering 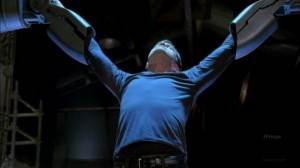 I recently received the very first copy of my new book on Fringe (Into the Looking Glass: Exploring the Worlds of Fringe, ECW Press). Its official publication date is not until the first of October, so this was a nice surprise, not to mention a great way to start the season!

There’s a chapter in there titled ‘The Father, the Son and the Trans-universal Machine,’which may sound a bit grandiose–it’s really just a chapter on Peter–but now that I’m reviewing it for the first time in print, I am reminded of the extraordinary religious allegory of the season 3 finale. Fringe is giving Lost a run for its money.

It’s not news that Peter was being set up as a messiah figure throughout season 3. Walter–the father–must give up his only son in order to save all of humanity. (How many times did Walter remind the others, ‘he is my son!’) In the finale, the Christian imagery is played up as Peter willingly locks into the machine, arms outstretched, taking the form of a crucified god. Just when it seems his consciousness might not return, he arises with a renewed clarity of mind. As Olivia ascends the ladder, hoping to save him, he opens his eyes and begins his work of bringing the two universes together. He is god-like, with a steadfast certainty in contrast to everyone else’s confusion. He unites both sides of the universe–the yin and the yang as he mentions to Walternate at the cabin–and then disappears, ascending body and soul into another realm…or into oblivion. (While the two Walters engage in an argument very much like God and the Devil in the Book of Job–but that’s an observation for another day.)

Peter and Walter’s story reflects not only the Christian myth of the crucifixion, which actually was preceded by other myths of similar sacrifice, notably the Egyptian figures Osiris and Horus. Throughout the series, the relationship between Walter–the god and creator—and Peter–the sacrificial son–is reminiscent of the Abraham and Isaac story and the myth of Daedelus and Icarus, made explicit in season 3’s ‘Os.’

Without doubt, Peter Bishop’s character can tell us more about human faith than about time travel or parallel universes. He is a savior in many ways, but now that he is wiped from existence, I predict the characters will feel his presence in an entirely new manner: as believers. Olivia, with or without cortexiphan, will be able to tap into some extrasensory power to ‘see’his presence. Like the aforementioned myths, it is his ‘story’that will continue to live on. 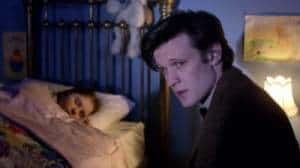 "We're all just stories in the end"

Let’s allow the Doctor to help us out on this one: How can we make sense of the idea that Peter never existed? If no one remembers Peter, then what is the purpose of his presence in the show? Doctor Who fans will recall that a central theme of season 5 is that, despite major shifts in the timeline, one can never really be completely erased from history, not if the memory of that individual is ‘imprinted’strongly enough on another individual. Even if one version of history is erased, the original memories are not completely lost. ‘We’re all just stories in the end,’the Doctor tells young Amelia Pond. Perhaps Peter, though he doesn’t exist, is still imprinted in some far corner of each character’s consciousness. His story is wiped from history, but there is some mystical residue left over. He will be present in the minds of the other characters, similar to the way he visited Olivia when she was trapped in the alternate universe at the beginning of season 3. She does not remember her true identity and tells Peter that he is just a hallucination. His reply: ‘Real is just a matter of perception. I am here. And I’m a part of you that you have to hold onto. You can’t forget who you are Olivia. You can’t forget where you’re from. You can’t forget this'(kissing her).

The fact that the other characters instantaneously lose their memories of Peter in the final scene feels so disturbing to us because remembering is essential to the human experience. If we are all ‘just stories in the end,’memory and record-keeping are our most valuable human qualities. So what does this mean for Peter, the crucified savior? Will anyone remember that he saved the world? Will Walter ever know that he sacrificed his only son? In tonight’s ‘Neither Here Nor There,’watch for the void that Peter left behind, the untold story that will leave Walter and Olivia feeling an inexplicable loss. 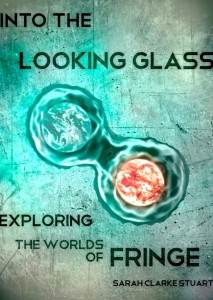 A New Book on Fringe

Thanks for reading! You can check out my new book here: Into the Looking Glass: Exploring the Worlds of Fringe