Home
Fringe: Find Out Who the Observers Are on Feb. 24 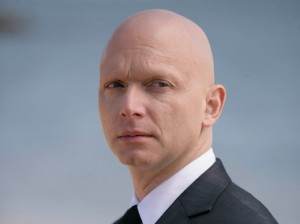 Fringe‘s fourth season is really heating up, and don’t expect thatÂ momentum to be deferred. Friday’s episode, “A Better Human Being,” promises to be a great outing, especially after the cliffhanger of last week’s “Welcome to Westfield,” which saw the new timeline’s version of Olivia apparently regaining the memories from the other timeline’s self. But it’s the February 24 episode that’s really going to blow your mind. The episode, titled “The End of All Things,” is apparently so good that it necessitated releasing a trailer two weeks in advance.

“Answers are coming,” the trailer ominously promises. What answers are we talking about, exactly? Well, if the trailer is to believed, a very, very big one is going to be answered: who are the Observers?

September (Michael Ceveris) will appear in the lab before Peter, suffering from the gunshot wound he had in “Back to Where You’ve Never Been.” Either the gunshot happens after he enters the lab or his wound is healed, though, because the trailer reveals another shot of him standing next to Peter, with Peter asking him a fateful question: “Who or what are you?” The trailer seems to make it certain that we’ll get a concrete answer.

Watch the trailer below. FringeÂ airs its next episode, “A Better Human Being,” Friday, February 17 at 9/8c on FOX. “The End of All Things” will air the next Friday.